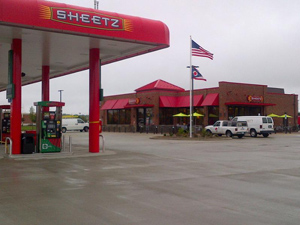 Ayaz Farooqui opened a Quick Mart convenience store in Murrieta, Calif., in mid-October. It features a small lobby with a set of personal mailboxes and a market area where shoppers can buy drinks, snacks and sundries. Other services include check cashing and lottery.

Hanley Investment Group negotiated the sale of an absolute NNN single-tenant 7-Eleven in Denver. The purchase price was $1.88 million, which represented a 4.60% capitalization rate, one of the lowest for a single-tenant 7-Eleven on record in the state of Colorado. The seller is a private investor from Frisco, Texas. The buyer is also a private investor. The 2,900-square-foot 7-Eleven, which was built in 2012, is situated on a 0.34-acre parcel.

In early October, CITGO marketer Consumers Petroleum and its Wheels Convenience Stores opened convenience stores in Glastonbury, Conn., and Westport, Conn. The Westport space marks the reopening of a gas station that closed in 2013 after being a family-owned business for 80 years. Consumers Petroleum is also a family-owned business, with owner Rich Wiehl representing the third generation of entrepreneurs. The Westport Wheels offers Nothin' But Foods products--first sold through local cafes, farmer's markets, and gyms--among its other convenience store items.

A new Circle K convenience store opened in Joliet, Ill., on October 1. Part of the Circle K franchise system, the store offers lottery, propane and is open 24 hours; it is co-branded with Mobil fuel.

Cumberland Farms held a grand opening on October 27 for a convenience store in North Adams, Mass.

Wawa held the grand opening for a convenience store in Egg Harbor Township, N.J., on October 24.

NOCO Express announced on October 1 that it has purchased a Mobil Mart in Buffalo. It will remain Mobil branded. As part of the acquisition, NOCO will be renovating the 2,200-square-foot convenience store and add a full-service Tim Horton's and expanded product offerings. NOCO's exclusive Nickel City Foods fresh offerings will also be available.

Sheetz opened a new convenience store in Strongsville, Ohio, with a ribbon cutting on October 2.

When a tornado hit the City of Quapaw, Okla., about 60 homes and businesses were damaged or destroyed. Getting the city back on track after the storm is why Stephanie Bruner and her family decided to open up a new convenience store. She is the owner of Wildcat Express, the first business to open after the storm hit in April.

In mid-October, Rutter's Farm Stores has completed renovations at the convenience store located in Dover, Pa. The new site will now be open 24 hours a day, 7 days a week and includes six fueling positions with diesel. A new LED canopy will provide efficient bright lighting and protection from the weather to customers pumping fuel. Inside, it has added touchscreen food order kiosks and an updated menu of subs, fresh salads, gourmet, jumbo chicken wings, mahi-mahi fish tenders, Ultimate Burgers and all-beef short ribs. Breads, muffins, cookies and biscuits will be baked fresh in the store daily. It has also expanded the coolers.

As of October 31, Sunoco gas pumps are open and operating at the B&D Auto & Truck repair station in Memphis, Tenn. B&D owners Bruce and Diane Christy also have included a small shop that features coffee, cappuccino and fountain pops, along with snacks, candy and cigarettes.

CST Brands held a grand opening celebration and a ribbon-cutting ceremony on October 31 for a Corner Store convenience store in Humble, Texas.

On October 16, The Royston Group announced that it completed the sale of a NNN Valero gas station leased to CST Brands. The single-tenant net-lease gas station in Houston included a 2,813-square foot-building and sold for $2.55 million. The property sits on 31,000 square feet of land. The site was leased on an absolute triple-net basis to CST Brands operating as a Valero gas station. The initial lease term was 20 years with rent escalations every five years. The buyer purchased the property as part of a 1031 exchange. Investment highlights included a long-term NNN lease with rent increases, an excellent retail location and an experienced high-credit tenant in CST Brands.