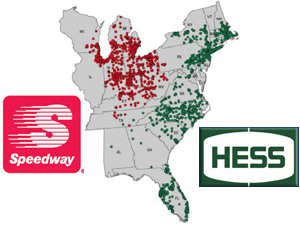 According to an analysis this week of station data by GasBuddy/OpenStore LLC, Speedway has rebranded 86 Hess sites since Oct. 15, 2014, when the fuel-price intelligence provider first started tracking the conversions.

"We're showing 1,550 outlets currently branded Speedway, while stations still flying the Hess flag have declined to 1,261 outlets," Patrick DeHaan, senior petroleum analyst at GasBuddy, Gaithersburg, Md., told CSP Daily News. "Since the conversion started in October, things have sped up, and Speedway has 16 active conversions right now based on our station data, up from single digits during October and early November."

The network of former Hess sites are spread across 16 states on the East Coast and Southeast. Under the terms of the deal, Speedway has three years to rebrand the sites, and it is investing $410 million between 2014 and 2017 in the process.

Tony Kenney, president of Speedway, Enon, Ohio, has described the chain's integration of the Hess sites as its "No. 1 focus." The acquisition has made Speedway the largest company-owned c-store chain in the United States by revenue, and pushed it from the sixth-biggest to third-biggest chain by site count, according to the 2015 CSP Convenience Top 101 ranking.

For Speedway, the rebranding is not merely a swapping of flags but also an opportunity to unlock the inside potential of the former Hess sites, with its Speedy Rewards loyalty program as an integral component.

"The opportunity really is upgrading or enhancing the performance inside the store," said Kenney during the company's last earnings call in late October. "Leveraging some opportunities in foodservice, general merchandise, in combination with partnerships with our key suppliers and consumer product companies, with our loyalty program is going to give us an opportunity to leverage the traditional Speedway performance into the Hess assets."