HERSHEY, Pa. -- The Hershey Co. will launch Hershey Simple Pleasures, a new line of chocolates "in a smooth and creamy format that has 30% less fat than the average leading milk chocolate," J.P. Bilbrey, president and CEO of The Hershey Co., announced during the company's first-quarter 2012 earnings call on Tuesday. 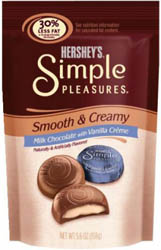 Simple Pleasures will debut June 1, said an Advertising Age report. The candies are a little bit larger than a quarter and will be sold in a standup pouch.

Simple Pleasures will be supported by a dedicated ad campaign, including TV spots, a spokesperson told the publication. Hershey is also planning a new campaign this summer for Rolo, marking the brand's return to TV, where it has not advertised since the late 1980s. Ads will tout regular Rolo as well as new Rolo Minis.

"In the c-store class of trade where the Easter impacts are minimal, the CMG [candy, mint and gum] category was up plus 8.5%. Total Hershey c-store performance was particularly strong with takeaway up 9.3%, resulting in a share gain of 0.2 points. These gains were driven by pricing, core brand advertising, in-store selling, merchandising and programming, including our continued successful promotional tie-in with the NCAA March Madness basketball tournament. In Q1, Hershey's c-store performance was balanced with retail takeaway up 8.6%, 15.1% and 15% in chocolate, nonchocolate and mint, respectively," said Bilbrey.

"It doesn't appear that higher prices at the pump are having a major effect at the c-store level. In case you missed it, on April 6, a NACS, or National Association of Convenience Stores, spokesperson was on CNBC and stated that despite higher gas prices, sales inside the store have actually increased; 2011 was better than 2010, and so far this year, he stated most members are telling him that sales inside the store are going up. Hence, the current prices at the pump don't appear to be having the same effect on consumer buying behavior at NACS locations as they have in the past."

He concluded, "The convenience store channel will continue to be a meaningful contributor to Hershey in 2012; however, as we make our way through the remainder of the year, retail dollar takeaway growth will most likely slow as we begin to lap the price increase."

The Hershey Co. is the largest producer of chocolate in North America and a global leader in chocolate and sugar confectionery. Headquartered in Hershey, Pa., it has operations throughout the world and more than 12,000 employees. With revenues of nearly $6 billion, Hershey offers confectionery products under more than 25 brand names, including Hershey's, Reese's, Hershey's Kisses, Hershey's Bliss, Hershey's Special Dark and Hershey's Extra Dark, Kit Kat, Twizzlers, and Ice Breakers. Hershey also is a leader in the premium and artisan chocolate segments, with such brands as Scharffen Berger and Dagoba, offered through the Artisan Confections Co., a wholly owned subsidiary.