NORTHFIELD, Ill. -- Kraft Foods Inc. is getting back into breakfast, with plans to introduce its belVita Breakfast biscuits in the United States in February, reported Dow Jones. 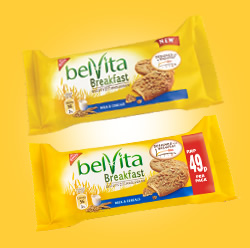 The U.S. rollout of belVita, which Kraft has sold in Europe for the last decade and started selling in the U.K. last year, marks the food company's re-entrance into grain-based breakfasts, a category it left when it sold Post cereals in 2008. The biscuits could pose fresh competition for breakfast for the likes of Kellogg and General Mills, especially for on-the- go items like Nutri-Grain snack bars.

But Kraft will essentially have to create a category from scratch. Americans' breakfast biscuits are soft, fluffy and buttery, and smothered with sausage and gravy or served with eggs. belVita--it loosely translates to "beautiful life"--is more like a cookie with whole grains, fiber and vitamins that, when paired with yogurt or fruit, makes up a balanced breakfast, according to Janda Lukin, Kraft's director of innovation.

Knowing it will have to attract consumers to an unfamiliar category, Kraft plans to back the launch with television advertising and other promotions such as in-store sampling. Kraft will sell belVita in more than 90,000 retailers by the end of next year, it said. Lukin declined to disclose how much Kraft will spend behind belVita's introduction, but she anticipates it will be able to steal some breakfast dollars from competitors.

"We do think that it's going to source from other breakfast options," Lukin said.

belVita generates more than $100 million in sales globally, a drop in the bucket for Kraft's annual sales of more than $49 billion, but Kraft is gearing to invest behind it over the next couple of years. Kraft brought belVita to Brazil last month and also plans to launch in Canada later in 2012.

The company hopes belVita will appeal to busy American consumers who don't have time to eat breakfast. A recent study by Kellogg on American breakfast habits found more than half of adults want to eat breakfast every day, but only one-third do.

"There's this tension in the morning where people know they should be eating a nutritious breakfast but they don't have the time for one," Lukin said.

belVita biscuits come individually wrapped in packages of four, and each box contains five packs, retailing for around $3.69. The biscuits will come in blueberry, golden oat and apple cinnamon flavors. The packs will also be sold individually at convenience stores for about $1.19 and Kraft is considering distributing it to foodservice outlets like cafes.

One hurdle to overcome is that Kraft has decided to place belVita in the same aisle as its Oreo cookies and Ritz crackers as opposed to the breakfast cereal aisle where General Mills and Kellogg sell their snack bars. Lukin said Kraft will need to make sure consumers know to find the breakfast biscuits in the cookie aisle, but Kraft has had success following the same game plan elsewhere. In the U.K., where belVita is sold alongside cookies and crackers, its sales are up more than 50% from a year ago, according to Nielsen & Co. data.