SAN DIEGO -- Popcorn's reputation as a snack food that is actually good for health has been bolstered by a new report that it contains more of the healthful antioxidant substances called "polyphenols" than fruits and vegetables. 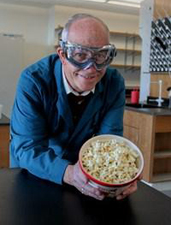 Vinson said that the polyphenols are more concentrated in popcorn, which averages only about 4% water, while polyphenols are diluted in the 90% water that makes up many fruits and vegetables.

In another finding, the researchers discovered that the hulls of the popcorn actually have the highest concentration of polyphenols and fiber.

"Those hulls deserve more respect," said Vinson, who is with the University of Scranton in Pennsylvania. "They are nutritional gold nuggets."

The overall findings led Vinson to declare, "Popcorn may be the perfect snack food. It's the only snack that is 100% unprocessed whole grain. All other grains are processed and diluted with other ingredients, and although cereals are called "whole grain," this simply means that over 51% of the weight of the product is whole grain. One serving of popcorn will provide more than 70% of the daily intake of whole grain. The average person only gets about half a serving of whole grains a day, and popcorn could fill that gap in a very pleasant way."

Vinson cautioned, however, that the way people prepare and serve popcorn can quickly put a dent in its healthful image. Cook it in a potful of oil, slather on butter or the fake butter used in many movie theaters, pour on the salt; eat it as "kettle corn" cooked in oil and sugar--and popcorn can become a nutritional nightmare loaded with fat and calories.

Vinson explained that the same concentration principle applies to dried fruit versus regular fruit, giving dried fruit a polyphenol edge. Previous studies found low concentrations of free polyphenols in popcorn, but Vinson's team did the first study to calculate total polyphenols in popcorn. The amounts of these antioxidants were much higher than previously believed, he said. The levels of polyphenols rivaled those in nuts and were up to 15 times greater than whole-grain tortilla chips.