MINNEAPOLIS -- With the NFL playoffs in full swing, the majority of football fans say they feel no guilt about snacking as they watch their favorite teams try to make it to the Super Bowl, according to the third annual SUPERVALU Inc. Snack Down Survey by Harris Interactive. 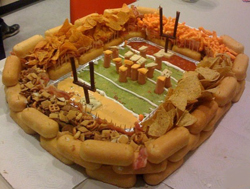 The majority of respondents acknowledge that few, if any, snacks they eat during games would be considered healthy or good for them. The survey also found that 54% of fans say they don't confine their snacking to any special time but will eat throughout the game. Another 12% say they start snacking before the game as a warmup, and 9% report that "I load up my plate at kickoff."

And what will these millions of fans be eating? Their favorites are dips and spreads (32%) followed by chicken wings (23%), both up slightly in popularity from last year. Tied for third place at 14% were pizza and salty snacks such as chips, peanuts, pretzels or popcorn.

Nearly three-quarters of the fans say they plan to prepare and serve food and snacks to others at their home during the runup to the Super Bowl and during the big game.

When asked what current or former NFL player they would most like to have at their Super Bowl party, former San Francisco quarterback Joe Montana topped a long wish list of NFL greats, followed by current quarterbacks Tim Tebow of the Denver Broncos, Aaron Rodgers of the Packers, Tom Brady of the Patriots, Peyton Manning of the Colts and former quarterbacks Terry Bradshaw, Brett Favre and Joe Namath. While 12 of the top 13 choices nationally were quarterbacks, Pro Football Hall of Fame wide receiver Jerry Rice was the sole nonquarterback among the top picks. The region where people lived had a strong influence on the fans' choices for favorite guest.

"As the most-watched televised event in the United States, the Super Bowl has become a big occasion for people to gather together with family and friends to enjoy the action and share food," said Blaine Bringhurst, SUPERVALU's vice president of grocery. "Whether fans are looking for some simple ideas to make their offerings healthier or want to spice up their standard gameday fare, our family of stores can help them put together a party menu their guests will remember."

Tough economic times aren't stopping fans from spending on their favorite foods to watch their favorite teamsl 76% of the fans say they have not changed their snack budgets from last year, while 7% plan to spend more.

Half of hosting fans will spend up to $100 or more on game-day fare, while 38% will spend less than $50. As for where to buy their NFL playoff and Super Bowl party foods, the vast majority, nearly 80%, say their local supermarket, followed by discount stores, mass merchants or warehouse clubs (43%); restaurants, caterers, gourmet food stores or delicatessens (6%); and convenience stores (4%).

As for game-day rituals, three-fourths of the fans say they have none, but 16% say they wear the same lucky clothes each game; 7% report watching games in the same place; 5% say they always eat and drink the same thing on game day; and 3% avoid watching the game with certain people (perhaps fans from the enemy team).

While fans from around the country generally stick to simple, easy-to-prepare items, they also have used game-day viewing occasions to experiment with unusual foods, including rattlesnake, fried alligator, cow tongue tacos, fried turkey gizzards, Rocky Mountain oysters and chocolate-covered ants. When considering the occasion, others cited items they've eaten or served that aren't typical fare for the event, such as apple slices, macaroni and cheese, and Chinese food.

After all that food is served, how important is the game for football fans? Some 29% describe themselves as "the person shouting and screaming at every play in the game," 23% consider themselves "diehard" fans and 15% say they are "the 12th man on the team." Another 16% say they only watch big games and 17% say "I'm the party fan, drinks and snacks are my priority."

While there is strong regional support for the local team, topping the list of national favorites are the Packers (9%) and the Cowboys (9%), edging the Steelers (8%), the team that ranked No. 1 last year. Other favorite teams nationally included the Patriots (6%), the Giants (6%) and the 49ers (6%).

SUPERVALU created the Snack Down Survey to better understand football fans' game-day snacking habits, and their plans for the NFL playoffs and Super Bowl this year. The third annual Snack Down Survey was conducted online in December 2011 by Harris Interactive among 25-plus-year-olds who will have some level of involvement in the preparation of an NFL playoff game or Super Bowl snack. In addition to a national sample of 1,005 respondents, the research featured samples in markets where SUPERVALU's family of grocery stores are located. Following are the local survey markets, the base sizes and the corresponding SUPERVALU banner: Baltimore/Washington, D.C., 202, Shoppers Food & Pharmacy; Boise, Idaho, 200, Albertsons; Boston, 202, Shaw's/Star Market; Chicago, 206, Jewel-Osco; Minneapolis-St. Paul, 201, Cub Foods; Orange County/Los Angeles, 205, Albertsons; Philadelphia, 201, Acme; San Diego, 205, Albertsons; and St. Louis, 204, Shop 'n Save.

SUPERVALU is one of the largest companies in the U.S. grocery channel with annual sales of approximately $37 billion. It serves customers across the United States through a network of approximately 4,300 stores composed of 1,104 traditional retail stores, including 798 in-store pharmacies; 1,309 hard-discount stores, of which 922 are operated by licensee owners; and 1,900 independent stores serviced primarily by the company's traditional food distribution business.