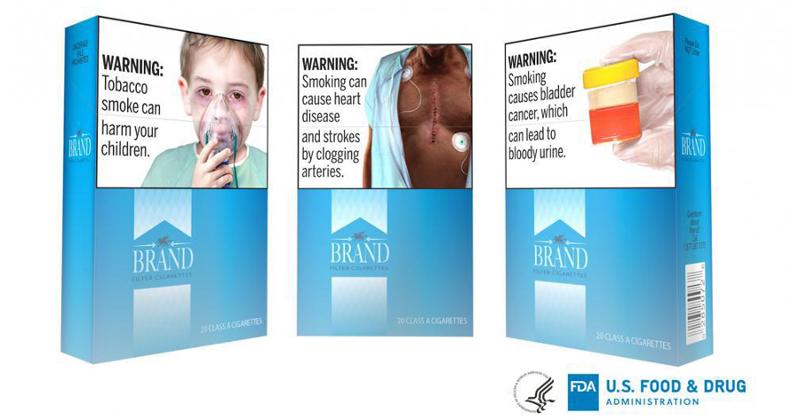 Several cigarette manufacturers challenged this first text and graphic cigarette health warning rule in court on the grounds that the warnings violated commercial free speech protections under the First Amendment to the U.S. Constitution. In 2012, the U.S. Circuit Court of Appeals for the District of Columbia overturned these warnings as violating the First Amendment and sent the matter back to the FDA to create new warnings that comply with Constitutional standards.

On March 17, 2020, the FDA issued a new rule requiring 11 new health warnings on cigarette packs, cartons and ads, consisting of text warning statements accompanied by graphic color images. These new warnings would be required beginning June 18, 2021. Two federal lawsuits have been filed to invalidate this rule.

On April 3, 2020  R.J. Reynolds Tobacco Co., along with several other manufacturers and five retailers filed a lawsuit in the Eastern District of Texas to invalidate both the FDA’s recently issued rule for new text and graphic cigarette health warnings and Congress’s requirement that the FDA mandate these warnings. On May 6, the plaintiffs in this lawsuit and the FDA jointly asked the court for a 120-day extension of the effective date of the new cigarette health warnings to Oct. 16, 2021, because of the disruptive effects of the global outbreak of COVID-19 on both manufacturers and retailers and on the FDA. A decision by the federal court on extending the effective date is pending.

Also on May 6, Philip Morris USA Inc. and Sherman Group Holdings LLC filed a lawsuit in the District of Columbia against the FDA also seeking to invalidate the graphic warnings rule and Congress’s requirement that the FDA mandate these warnings.

Several legal claims were made in these two lawsuits, including:

Although the graphic warnings requirements most directly impact manufacturers, who must provide the warnings on packages, cartons and advertisements, retailers need to be aware of the progress of these cases as their outcome will impact the cigarette products retailers sell.

Look Out for Robots Delivering for 7-Eleven