Price: Retail competition is fierce! My c-store-retailer rule of thumb to competing channels: Price parity to +$0.50 per 6-pack and to +$1.00 per 12 pack.

To gain a fair share of craft-beer sales, c-stores must be price competitive. Deploy trade-up pricing strategies. Encourage trade up to a more expensive brand by lowering the margin percent on the high-dollar ring of craft beer. For example, 25% of a value case = $3.98 of margin, while 20% of a craft case = $7.07 of margin. Encourage trade up to craft beer with competitive pricing, and craft beers will deliver high revenues per case.

In summary, we discussed the high-revenue craft-beer opportunity for c-store. To maximize craft sales, c-stores must increase craft SKUs, be price-competitive, carry leading national and top regional brands and place craft beers on display to remind customers of their improved selection.

Double down on craft skus, from 8% to 16% (or nearer competing channels’ 32%)! All signs are positive for craft-beer growth in c-stores: segment growth, high dollar ring, less sold on promotion, woeful underdevelopment and biggest segment opportunity. The space to grow craft-beer sales is available in the value segment, which is over two times more developed as other channels. It’s time to double down; double craft SKUs to take advantage of the large craft opportunity for c-stores. 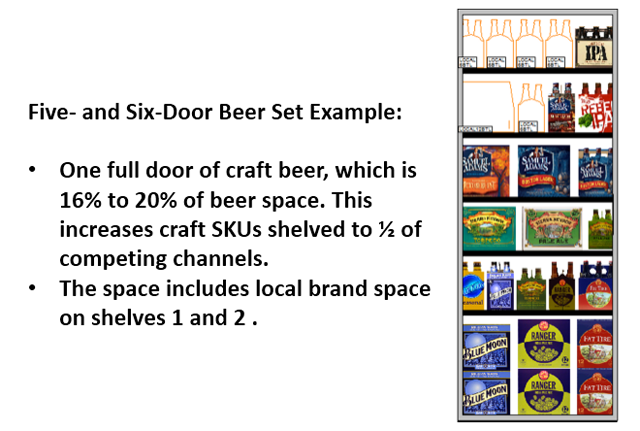