PURCHASE, N.Y. -- PepsiCo Inc. is shooting down a report that the company is in talks to buy SodaStream International Inc., an Israeli company that makes at-home carbonation machines, reported the Associated Press. 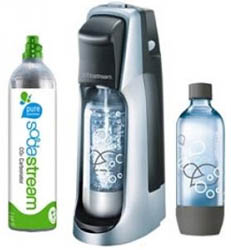 The Calcalist, an Israeli newspaper, reported that PepsiCo is in advanced talks to purchase SodaStream for more than $2 billion.

Even after reports of the denial, shares of SodaStream were up 6% at $73.51 in premarket trading.

A representative for SodaStream told AP that the company does not comment on rumors or speculation.

SodaStream's machines let people make carbonated water at home, with a variety of concentrated flavors that can be added. The company has been making a push to grow in the United States, in part by targeting the waste generated by discarded soda cans and bottles

John Sicher, publisher of Beverage Digest, told the news agency that the deal would not make sense because it would upset PepsiCo's bottlers, who distribute the company's beverages.

PepsiCo's denial of the SodaStream deal is much more strongly worded than the company's responses to speculation that it could be pushed to buy Deerfield, Ill.-based Mondelez International Inc., which makes Oreos, Chips Ahoy and other snacks.

In that case, the company had simply stated that it was not interested in any large-scale mergers and acquisitions, said the report.

At an investor conference last week, PepsiCo chairman and CEO Indra Nooyi reiterated her company is not targeting large-scale mergers and acquisitions, said a Wall Street Journal report. Instead, she said, the snack and beverage giant continues to focus on "tuck-in" acquisitions generally totaling less than $500 million a year.