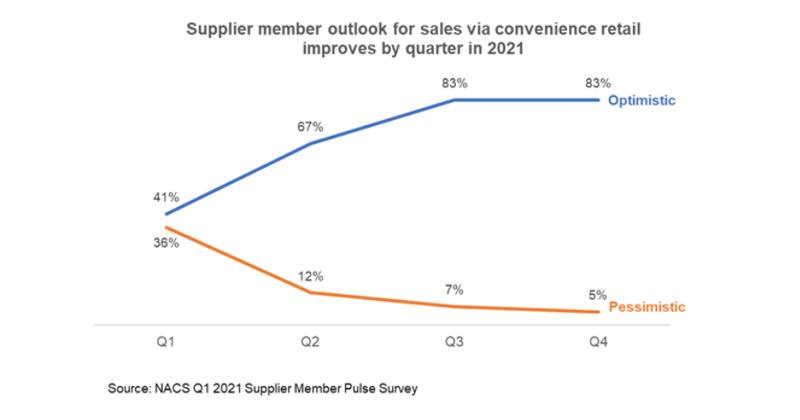 ALEXANDRIA, Va. — Suppliers who sell through convenience stores saw their sales in the channel grow in 2020, with nearly twice as many reporting an increase than a decrease—50% vs. 28%, respectively—according to the results of a new NACS survey of supplier members.

The NACS Supplier Member survey results mirror what NACS retailer members reported in a similar survey in January, with 59% of retailers reporting a sales increase, compared to 30% who saw a decline in in-store sales.

“Our industry continues to find success in very challenging times because our supplier partners truly are partners, and our close working relationships—and alignment on strategies and attitudes—are important, and we together redefine how we provide convenience to customers every single day,” said NACS Chairman Kevin Smartt, CEO and president of Kwik Chek Food Stores, Bonham, Texas.

“The challenges and change that we and our convenience retailer partners have experienced over the past year have been seismic. What hasn’t changed is our collective commitment to each other and the consumers we both serve,” said Rick Brindle, chairman of the NACS Supplier Board and vice president of industry development for Mondelez International, Deerfield, Ill.

Suppliers also noted the top issues for the convenience retail industry to address, led by keeping up with shopper preferences (55%), introducing new products (49%) and meeting demand for pickup or delivery (38%). Foodservice offering (45%) and food safety (33%) were also top priorities expressed by suppliers.

Suppliers are more optimistic than pessimistic about the their sales in the convenience retailing channel for first-quarter 2021 (41% vs. 36%), and the their optimism grows significantly for the ensuing three quarters, peaking at 83% of suppliers expressing optimism about fourth-quarter sales, compared to only 5% who are pessimistic. This optimism for their prospects in the convenience channel even exceeds retailer optimism, with 67% of retailers expressing optimism for the fourth quarter, compared to 7% who are pessimistic.

Founded in 1961 as the National Association of Convenience Stores, NACS has 1,900 retailer and 1,800 supplier members from more than 50 countries.

4 Strategies to Succeed As an Essential Business