BROOKLYN, N.Y. -- 7-Eleven franchisee Tariq Khan will be allowed to remain in his five convenience stores on Long Island, N.Y., at least until July 22 following a ruling in court Tuesday that also requires "all evidence be preserved" in the revenue-skimming operation in which Khan is alleged to have taken part. 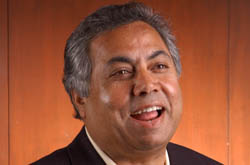 7-Eleven requested a temporary restraining order requiring Khan and his fellow defendants to produce and allow copying of digital images from the stores' surveillance cameras, while also seeking to "compel the defendants to surrender the stores to 7-Eleven and to eject them from the premises."

U.S. District Judge Arthur Spatt granted the restraining order, but did not go so far as to order the handing over of the video images or the defendants' ejections from the properties.

Spatt also denied Khan's temporary restraining order that would prevent 7-Eleven from removing any more of its property from the five stores. Khan's hope is to maintain the viability of his businesses for when he is found not guilty of 7-Eleven's claims, according to court documents obtained by CSP Daily News. To that end, Spatt did direct 7-Eleven to return the lottery machines, which are state property, to the stores.

Other details of the restraining order requests--including a move by Khan to reestablish deliveries of 7-Eleven-branded products, such as cups, wrapping and containers with the franchise logo, from distributor McLane Co.--are scheduled to be heard by U.S. Magistrate Judge Arlene R. Lindsay the morning of Monday, July 22.

Khan requested the preliminary injunction against 7-Eleven so that he can retain possession of his five stores. In a declaration to the court, Khan stated that the claims of diverting profits from 7-Eleven Inc. and violating his franchise agreement are "baseless … outrageous and unsupportable." He also accused the retailer of targeting him for being an "outspoken advocate" for franchisee rights.

"[7-Eleven's] motivation is not my alleged misconduct," he wrote. "It is vindictive animus predicated on my many years of being an outspoken advocate for myself and fellow franchisee owners who are viewed by corporate management not as partners in a successful business plan, but essentially as low-level individuals whose voice is irrelevant."

A 7-Eleven spokesperson offered no comment, referring only to additional court documents, which continue to outline a series of "illicit and wide-ranging schemes" that shorted the corporation out of $2.43 million over three years.

The July 2 filings came after 7-Eleven Inc. accused Khan, his wife, son and several employees of manipulating cash registers and running a "business within a business" to avoid having to pay the corporation its contractually obligated share of income.

At issue in the preliminary injunction is access to video collected by surveillance cameras in the five stores. 7-Eleven officials believe those cameras "likely captured images of the fraudulent conduct" and wants immediate access to them to collect that information.

Khan, however, claims in court documents obtained by CSP Daily News that 7-Eleven violated its own franchisee agreement when its representatives "ransacked" the five stores and ordered Khan and his employees to vacate the premises. Khan has refused to vacate the stores.