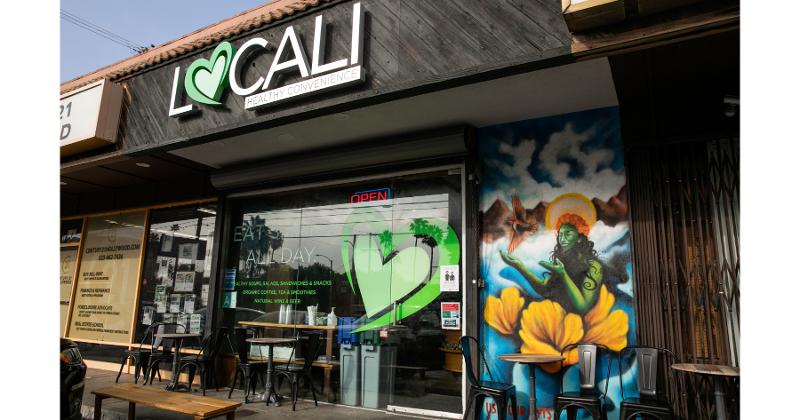 LOS ANGELES — Los Angeles-based convenience-store brand Locali was conceived in 2009 at a time when health and convenience “were still an oxymoron,” says co-owner Melissa Rosen, who along with partner Greg Horos operate on the premise that “food is medicine, on all levels.”

Rosen waxed nostalgic about the beginning of what’s now an iconic local brand known for cutting-edge vegan foods and more: “I’d been working as a health counselor in a food desert, and the dietary prescriptions the physician I worked for prescribed to patients were nearly impossible for them to follow at that time due to issues of access. That problem spurred our idea around the need for healthy convenience stores. There was an Armenian deli set to close in our neighborhood so we took over the lease. From idea to operating our first location, it was roughly six months.”

The brand at one time had grown to four locations but through the pandemic, scaled back to two stores: one an 80-square-foot kiosk site in downtown Los Angeles and the other a 650-square-foot traditional c-store in Hollywood. While outright closing one location in Venice, Calif., a fourth SoCal location is morphing from a brick-and-mortar store into a “ghost kitchen”—carried out with third-party partner Miami-based Reef Technology. It’s within this venture that Rosen and Horos plan to distribute Locali’s signature vegan products to consumers, powered by pickup and delivery options, and perhaps even e-commerce.

The partners’ decision to shutter two stores was due to stringent safety and health-related reasons. While they operate on the leading-edge of implementing health and safety protocols, they realized that a large number of local residents weren’t eager to visit retail locations in person as COVID-19 loomed large. This realization convinced them that staying in business at these two locations was not fiscally viable.

Compensating for the loss of two retail sites required thinking outside the box. In addition to the ghost-kitchen venture, the co-owners are in the process of creating a licensing venture for their most popular signature items, including a packaged salad line sold in Whole Foods and proprietary items such as a popular coconut, bacon and granola. “We were in the production cycle for these items, but ran into delays due to supply chain issues,” says Rosen.

“We took our licks during COVID, for sure, but we’re still here,” says Rosen. “On staffing, it’s been very hard for us to find [new] staff, but we have had a long-term team of what I call ‘ride or die’ workers who stayed with us rather than leaving or going on unemployment.”

Read ahead for more insights into Locali, where it has been and how it plans to continue to evolve in 2022.

Q: When you think back on the conception of Locali, what were some of the motivating factors that were top of mind with you and Greg?

A: We envisioned it as the love child of 7-Eleven and Whole Foods. Locali evolved beyond our original vision. We are now known, first and foremost, for the vegan dishes from our deli. Our menu has a warranted cult following. I’m partial, but I think we serve some of the tastiest smoothies, salads and sandwiches in the country.

Q: Can you detail the ghost-kitchen initiative with Reef Technology?

A: It’s a licensing agreement. Reef has a mobile convenience model, and we’re going to focus on offering a limited best-sellers portfolio of our menu through them—all of the fully vegan options. It hasn’t gone live yet but is looking to in 2022.

Q: You have one true c-store left, in Hollywood. Describe what it offers?

A: At Hollywood, we see customers who might buy a vegan sandwich a couple days a week and later order a sandwich with turkey. We are supported by daily regulars at this store, some who come in for breakfast, lunch and dinner. In the store, all sandwiches come vegan by default, and then customers can elect to choose to substitute real meat or cheese on some of them. Our Peaceful Warrior sandwich, when it’s made with vegan deli meat and Swiss cheese, is a really special vegetarian item. It has arugula, red pepper, mango chutney and Locali-made curry spread. We serve it on six-grain bread, and it’s the perfect combo of sweet and savory.

Q: During the pandemic, many c-stores a go-to place as a safe, quick retail alternative to grocery or big-box. And many consumers were pleasantly surprised to find the upscale selections in stores. Did you find this to be true too?

A: Our Hollywood sales skyrocketed due to this fact: One leading consumer concern with COVID was diet-related. It was an unpleasant fact that many people saw they needed to take their health into their own hands. And our foods were a gateway to better healthy eating. We also needed to build community during this time, and our c-store team members were great at connecting with regulars to build community. We also supported local vendors. A pressed-juice vendor came to us, and we began offering her juices at the Hollywood store. Greg and I felt it was important to look out for and support local suppliers.

Locali Looks to Grow Through Franchising