ANKENY, Iowa -- The industry should get a pretty good clue to Casey’s General Stores future growth in March, when the convenience store chain expects to announce the location of a second distribution center. 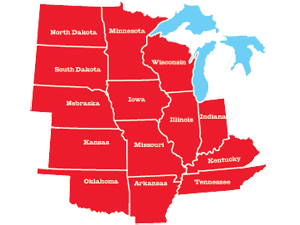 In September, CFO Bill Walljasper said the location of the distribution center will allow the chain “to springboard further east into Tennessee and Kentucky and south for that matter.” However, as of Tuesday’s second-quarter earnings call, the company continued to keep the potential location close to the vest.

“We are still working out the incentive packages offered by the various states and communities, and so we haven't quite finalized the location in that regard,” Walljasper said. “We're hopeful that come the March conference call, we'll be able to give information as to the direction as far as the location, cost, when we will start the construction, the timing of the construction and any more details you might have.”

The distribution center relates directly to Casey’s expansion plans. The company’s annual goal is to build or acquire 70 to 105 (4%–6%) stores and replace 20 existing locations in fiscal 2014. Through the first six months, the company has built 14 new stores and acquired an additional 22. The company also completed 14 replacement stores and 19 major remodels.

“We are pleased with the pace of our new-store construction and replacement efforts, and continue to have active dialogue with multiple acquisition candidates,” chairman and CEO Robert J. Myers said in a press release. “As we look ahead to the second half of fiscal 2014, we believe there will be ample opportunities to grow our business in both new and existing markets.”

Casey’s General Stores currently has 34 new stores and 14 replacement stores under construction, as well as five stores under written agreement to acquire.

“For the second quarter, total inside sales were up 15.5%, and total gasoline gallons sold increased 9.8% compared to the same quarter a year ago,” Myers said. “The company is pleased with the growth and customer-count lift associated with the various initiatives we have put in place.”

“The company sold 11.7 million renewable fuel credits for $7.6 million in the second quarter, which enabled us to exceed our gas margin goal,” said Myers. “The fuel-saver program implemented in December 2012 continues to drive new customers to our stores, which was the primary reason we significantly exceeded our sales goal this quarter.”

Total gallons sold for the year were up 9% with an average margin of 19.4 cents per gallon. Year-to-date same-store gallons were up 3.6%.

“The company experienced strong lifts in beer and beverage sales, and believe we have gained significant market share with our cigarette retail price adjustments made last fiscal year,” said Myers. “Although the cigarette adjustments adversely impacted our margin compared to the same quarter a year ago, we were still able to increase gross profit 11.1%.”

“Our prepared food sales continue to benefit from various growth initiatives, such as 24-hour expansion, pizza delivery and major remodels,” said Myers. “The margin is slightly below goal due to increased input costs such as meat and supplies.” Total sales for the category were up 16.9% year to date, and gross profit increased 14.7% to $208.9 million.

“The various growth initiatives being implemented, including new-store construction, acquisition and replacement activity, are the primary reasons for the lift in operating expenses,” said Myers. “Store-level operating expenses for locations that have not been impacted by the initiatives were up 4.9% for the quarter.”

Casey’s General Stores is based in Ankeny, Iowa, and operates 1,759 c-stores.