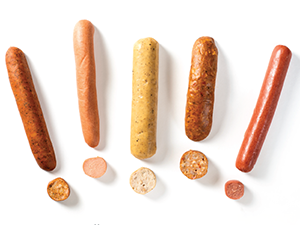 No more poignant words can be spoken about the regional nuances of roller-grill preferences (or any in-store category, really). Retailers sell a lot of chorizo down South, but not so much in the Northeast. Hot dogs in Chicago are a bit milder than what you’ll find in New York. And don’t even try to define “Italian sausage” with a group of coast-to-coast consumers—especially if someone’s nonna is involved.

But Brian Matlock, vice president of marketing and retail operations for Molo Petroleum Cos., Dubuque, Iowa, doesn’t even bother himself with regional roller-grill data.

“I don’t want to be like anyone else. I want a point of differentiation,” he says. “When someone is making a buying decision, I want to make that decision easy for them because we’re different … and that’s the reason why they come in.”

Regional sales and consumer data are important benchmarking tools, but there’s so much more to building a roller-grill program that resonates with guests. To create something unique, craveable and differentiated, you must tell a story.

First, take the time to understand trends that exist from coast to coast. When it comes to hot dogs, the brands are big, and those from the East Coast have a stronger flavor than those in the Midwest, says Mathew Mandeltort, vice president of foodservice strategy for Eby-Brown, Naperville, Ill.

“The difference between, say, a Vienna or a Ballpark and a Nathan’s dog is fairly profound in that regard,” he says.

Outliers in the sausage category occur in the south central United States and California, where chorizo sees more play. “Chorizo has the biggest spike on an index basis in south central—which is expected with Texas—and California had the highest indexing,” says Rob Ramsey, senior manager of channel marketing for Tyson Convenience Foodservice, Springdale, Ark., citing IRI grocery consumption data. The south-central region indexes at 300, “which is off the charts, and California is about a 175.” Compare those figures to the Northeast, the lowest indexing region for chorizo, at 12.3.

Other regional favorites in IRI’s data include andouille, which overindexes in the mid-South, south central and Southeast, and Italian and Polish sausages, which overindex in the Northeast.

“Regionalizing a portion of your roller grill is good business,” says Ramsey. “It’s a way to show you care about your local customers and that you actually understand them and what they like.”

Chorizo may overindex in the South, but don’t think spicy foods aren’t resonating further north. Home Market Foods’ Buffalo Ranch Chicken RollerBites are the company’s No. 1 seller in all U.S. regions, according to Karen Brosseau Slaby, brand manager, food away from home, for the Norwood, Mass.-based company. Home Market Foods has been focusing its R&D efforts on bold and spicy ethnic flavors, including Sweet Thai Chili Chicken and Sriracha Chicken RollerBites, which debuted at October’s NACS Show.

Matlock, who has worked for c-store chains from Texas to Massachusetts to Iowa, says the demand for spicy foods on the roller grill follows him wherever he goes.

“The farther south you go, the hotter the mix can be,” he concedes, but the heat comes to his roller grill by way of the condiment bar. “We have jalapeños, we have giardiniera—it’s more of a medium, but it kicks off some heat.”

A similar strategy is found in the West at Maverik’s 278 stores. “Our volume is such that we have rationalized down to purely hot dogs, cheddarwurst, [Schmidt’s] Bahama Mamas and Jalapeño Bahama Mamas,” says Kyle Lore, corporate chef for the North Salt Lake, Utah-based chain. Enrobed products are available in warmers.

As with Matlock’s stores, such simplicity on the roller grill allows for personalization at the condiment bar. The stainless-steel fixture at Maverik stores includes an array of toppings and proprietary sauces in squeeze bottles. Offerings include spicy brown mustard, chipotle mayonnaise, sriracha and salsa, which are meant for topping roller-grill items, sandwiches or burgers.

Despite running stores across a 10-state footprint, regional nuances do not stand out from market to market, Lore says. He attributes that to the company’s niche branding, targeting people on their way to enjoy adventure sports. “We’ve homed in on that demographic,” he says.

The adventuresome nature of Maverik’s consumers translates to their palates. “We definitely get to serve spicier food than most and have a good reception. Every six months, I’ll get a letter saying, ‘Is there anything that isn’t spicy?’ ” Lore says with a laugh.

Maverik’s success has come not necessarily from crunching data, but rather from taking the narrative of its region—rock climbing in Utah, whitewater rafting in Colorado—and overlaying it on the consumer experience and in-store assortment.

Brand power is important in the regional storytelling of the roller grill. “If you’re in Wisconsin, I don’t know that you’d eat anything other than a Johnsonville brat,” says Sharon Kuncl, vice president of merchandising, foodservice, for Eby-Brown. On the flip side, “if you go down South, they’re not going to know what a Kelly Eisenberg hot dog is, but a lot of them know what a Chicago-style hot dog is. So even though we’re not talking about the brand name, we can still do things like LTOs (limited-time offers) to bring that flavor profile into those areas where it may not be as popular.”

And don’t forget regionality is increasingly fluid as people travel and move around more frequently. Take, for example, Ruiz Foods’ recent Chicken and Waffle Tornados rollout. “Down in the South, we can put that out there and they’d probably say, ‘Hallelujah! You finally figured out our taste profile,’ ” says Kuncl. “Elsewhere, it could work well as a strong limited-time offering.”

In fact, LTOs may offer the best way to tell that regional story—but the real opportunity lies in turning LTOs into perennial, seasonal offers that consumers can crave all year. “You [start to] expect those flavors. You want to see that reoccurrence,” says Babb.

Not so sure? Did you have a Pumpkin Spice Latte last fall? Thought so.

Eby-Brown develops annual calendars for LTOs on the roller grill and focuses on two big time frames: Oktoberfest with bratwurst and baseball season with hot dogs. “We really try to push that All-American, go-to-the-ballpark, grab-a-dog type of feel,” says Kuncl.

Seasonality and regionality can combine to create a promotion that takes consumers to a particular place—even if they aren’t  here.

“One of my favorite Chicago holidays is Casimir Pulaski Day,” says Ramsey of Tyson. “Use that hook, and if it’s thematic and actually lines up with the varieties that you’re offering, that makes it even more powerful and regional.”

AdvancePierre Spices Up the Roller Grill