Ask convenience-store operators about their plans for prepaid cards, and they might not have a clear answer. They’re thinking back to a few years ago when Visa gift cards and prepaid cards with cellphone minutes were flying off the shelves. But these days, retailers seem to see less action from the category. 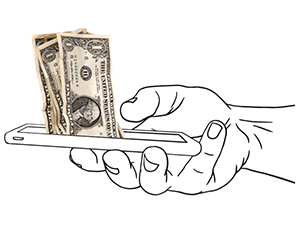 Phone-plan carriers offer incentives to encourage customers to reload their minutes automatically instead of through a card purchased from another retailer. Some plans from Boost Mobile, for example, allow customers to save $5 on each bill when they agree to automatically renew their plan each month. Moves such as this are one way mobile carriers insert themselves between the consumer and the retailer.

There are other reasons for the downturn in c-store prepaid sales outside of changes from phone-plan offers, but it mostly goes back to retail’s bogeyman of the day: the movement of consumer dollars from brick-and-mortar to online and mobile businesses.

But there is also a new application here. As consumers purchase more from their phones and computers, prepaid cards are increasingly used as online tools instead of just a way for the unbanked to make payments with plastic.

“People who have been hacked before will use prepaid cards to protect their personal and financial information,” Jackson says.

“Anecdotally, large prepaid providers have said that open-loop prepaid cards marketed as online shopping cards have been strong sellers for them.”

Millennials, in particular, are worried about malicious online players stealing their personal or financial information. As such, they are much more cautious than other age groups when it comes to payment security, according to recent research from TransUnion, a credit reporting agency. The study found that 68% of millennials stopped certain online transactions because of questionable payment security. This is compared to 54% of Gen Xers and a mere 28% of baby boomers.

Prepaid cards don’t just protect consumers from online theft of personal information. The cards also help some consumers protect themselves from muggings and theft by allowing them to carry a card instead of cash. Nowhere is this more important than in states where recreational marijuana is legal.

Due to myriad complicated state and federal marijuana laws, most pot retailers are forced to handle all transactions with cash. After marijuana was legalized in Colorado, Jim Nevill, president of Cape Charles, Va.-based loyalty provider Midax, concluded that marijuana consumers were more likely to fall victim to mugging and theft if they were forced to walk through crime-prone areas with hundreds of dollars in their pockets. Nevill decided he was well-positioned to do something about the situation.

“You need to know how ACH works, and it has to work within the state, or else it fails,” Nevill says. But for those who can pull it off, “it’s a legal win-win-win.” Consumers aren’t likely to stop using plastic anytime soon, as evidenced by Nevill’s strategy to arm buyers of legal marijuana with cards. But Jackson of Mercator believes the future of prepaid cards is digital, and c-stores will continue to serve as a link to the digital world for cash users.

“C-stores will have opportunities as a place for top-up and PIN-on-receipt services, as a place to convert cash into digital currency, as a place to make real-time payments and where people can find gifts,” says Jackson.

“Cash and a brick-and-mortar presence are important parts of omnichannel strategies, so c-stores will need to work with their partners to find out how they can fit into those strategies.”

If there’s any chance for c-stores to return to their former prepaid-card glory days, it’s through mobile devices or, at the very least, advanced point-of-sale (POS) systems that can identify a variety of payment platforms.

Take Amazon. The online retailer clearly intends to go after cash users with the launch of Amazon Cash. Users download a barcode to their smartphone, then display the barcode to a cashier at a participating brick-and-mortar retailer. Once they register the barcode, consumers can add anywhere from $15 to $500 to their Amazon accounts using cash.

Services such as Amazon Cash that connect the physical and digital worlds of retail aren’t just a boon for the unbanked.

The paranoid millennial who doesn’t want to share his credit-card information online will also use this service. And despite its current knot of legal hurdles, paying for pot is also bound to go mobile.

The future of prepaid is the mobile device. C-stores can either get there now, or try to catch up to consumers.