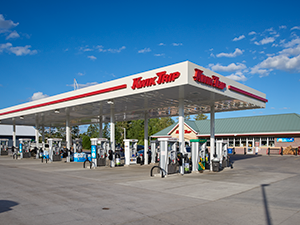 But in 2016, mystery-shop glory goes to perhaps the ultimate veteran. After losing the 2015 shop by two-tenths of a point, Kwik Trip has nabbed its fifth crown with an overall score of 94.6%.

“We’re happy to be on top again,” says Don Zietlow, co-founder and CEO of the La Crosse, Wis.-based retailer. “It’s humbling and a credit to our co-workers.”

Second-place finisher Family Express came in at a strong 93.9%, and Zietlow says he prefers to win in the kind of high-scoring photo finish we’ve seen the past several years than in a landslide.

“It’s always nice to win in a tough race,” Zietlow says. “The industry has gotten better, including Kwik Trip.”

Ask anyone at Kwik Trip’s more than 500 locations about the company’s continued success, and it comes down to one thing: culture.

“Taking care of employees” means a number of things at Kwik Trip, from competitive wages and benefits to sharing 40% of its pretax profits with team members at every level. Greg Olson, vice president of retail operations, says this culture helps Kwik Trip keep its turnoverrate at less than 30%.

On the flip side, “taking care of customers” goes beyond just retail execution.

“[It’s] simple things, like carrying groceries, helping change a flat tire,” says Olson. “Our co-workers are making a difference in the lives of our guests.

That golden-rule-like culture made it an easy decision for Kwik Trip to join the Partnership for a Healthier America (PHA), becoming the first c-store to do so back in 2014. Olson says partnering with PHA—which works with retailers, distributors and others to implement strategies to solve the nation’s childhood obesity crisis—was a natural extension of existing programs.

“We have a huge wellness initiative here for our co-workers,” he says. “Having those healthy foods available, being a member of PHA, ties in with our culture.”

“PHA has been good for our business by holding us to some rigorous standards and challenging us as a company to think outside of the box when it comes to what we can do,” says Erica Flint, a registered dietitian in food research and development for Kwik Trip.

Though meeting PHA standards isn’t always easy or cheap (Zietlow says it was pricey to start sourcing organic eggs and milk), it’s been invaluable in redefining health and convenience.

“It’s expensive to do, but it’s the right thing to do,” says Zietlow. “It raises the bar for convenience stores.”

It also puts Kwik Trip in a great place for 2017 and beyond—a future that includes opening 35 to 40 stores per year, increasing the number of Kwik Trip co-workers from 18,000 to 20,000 and (it hopes) claiming yet another mystery-shop win.

Not that Zietlow’s sweating it. “I see the future as much brighter than the past,” he says. “It’s going to be easier for us to grow—that’s a good thing.”