I remember the day clearly: It was lunchtime, and I slipped away from my downtown Chicago office to the Embassy Suites lobby up the street to take a call about a new job. 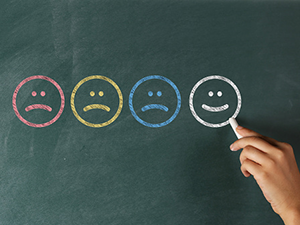 On the other end of my cellphone was a man who came across as equal parts Ira Glass and Jerry Seinfeld, jumping into an energetic, circuitous anecdote before I could even utter, “Nice to meet you.”

We had never talked before and he was testing me. He wanted to see how this green journalist might fare on his seasoned editorial team. I was wondering if I really wanted to take the leap from writing about idolized chefs and their white tablecloths to retailers and their roller grills.

I got the gig. And I grew to love this fascinating industry and its own wonderful cast of characters. I haven’t missed a day with those chefs, and that gregarious guy on the other end of the line became my boss, mentor and friend.

I’ve learned a lot from Mitch Morrison. I’m sure many of you have, too. A lot of his stories are about his two sons, Daniel and Ari, and his wife, Leslie; a lot are about his “wicked awesome” Boston Red Sox, his career as a newspaper reporter, or cab drivers—all who seem to tell Mitch his or her life story in the span of a ride.

But the stories he tells me that resonate the most seem to focus on one thing in particular: how to deal. To deal with stress—with tough situations both at work and out in the world.

Here’s just a sample of what I’ve learned from Mitch in the eight years since that first phone call. I hope he agrees with them. (Oh, hi, Mitch!)

Conviction breeds confidence. If you really believe in something—an idea or decision—you can power through any complications and contrarians that stand in your way.

Remove yourself. Mitch is a master at seeing the forest for the trees during contentious situations, and he calmly makes decisions from that vantage point. Be it problem-solving or ideating, he sees all the chess pieces and is able to make the best moves for the task at hand—regardless of his own position on the playing board.

Don’t just critique what’s there; figure out what’s not.

You get what you get and you don’t throw a fit. OK, admittedly this is a saying my daughter brought home from preschool, but it reminds me of Mitch. Through his actions, Mitch has taught me not to dwell too long on negative, unavoidable situations, but rather be mindful of how it can shape me moving forward.

Don’t just critique what’s there; figure out what’s not. This is an editorial lesson that also holds true in business and life. Call it what you will—due diligence, looking under rocks, being mindful—just do it.

Celebrate curiosity. Mitch gets those life stories out of his cab drivers because he’s genuinely curious about who they are. In the business world, that inquisitiveness generates great ideas, identifies weaknesses and creates a culture of mentorship.

Humanity first. It can be the busiest, most chaotic day, but Mitch will start a call with you by asking how you are, how the kids are, how the baseball team is (especially if they’re playing the Red Sox). Mitch is a diligent, passionate professional, but first and foremost he’s a person, and he knows you are too.

In Search of Comfort

I woke up this morning to the news of five police officers killed by a sniper in Dallas while protecting a peaceful protest. Two nights ago, I climbed into bed under the relentless hum of choppers sweeping the Minneapolis sky after a black man was shot and killed during a simple traffic stop.

When hard things happen in life, I often turn to Mitch, even if I don’t talk to him about it specifically, both of us often too busy getting through the day’s to-do list to stop and reflect together. I think about what he’d say, how he might be coping with the situation, and I find strength.

So here I sit, at my computer hours before the official start of the workday, with my early-

bird 6-month-old chirping away next to me. I absorb the news before me while faking a hammy smile to my child, who’s oblivious to the increasingly divisive world that awaits her. I think about how Mitch would mentally confront the situation. And I feel a little better. I crack a slightly more genuine smile.

I hope you’re lucky enough to have someone like Mitch—or better yet, the real Mitch—in your life. If you do, nurture that relationship, invest in it and watch it make your life a little better.