My former-hippie, came-of-age-in-the-1960s mother recently gave me a little lecture on the art of protest. The point of protest isn’t to effect overnight change, she told me; rather, it’s to create a subtle yet persistent shift in the way people think so that gradually, over time, the national sentiment changes, manifesting itself everywhere from the ballot box to the day-to-day actions and decisions we make as community members, employers, children and parents. 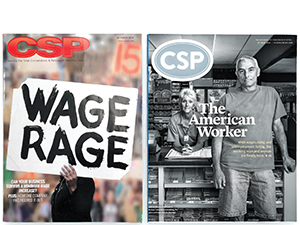 Take a look at the minimum-wage story arch of the past few years, and it seems protest is the one long-game method of communication that hasn’t changed as our attention spans get shorter and shorter.

That story has played out in three consecutive October issues of CSP, beginning with our “Wage Rage” feature in 2014. Over the past week, I’ve spent a lot of time comparing that cover to this month’s issue. The 2014 cover depicted a minimum-wage protester, a sight quite common in the service sectors that year. You can’t see her face, but a feeling of tense discontent permeates the page.

I hold it next to this current cover, featuring the two kinds of “American workers” in your lives: your employees and your customers. They each have the subtlest of smiles on their face.

I look at it, and feel as if things are a bit brighter for them today. And there are reasons for it. As you’ll see in this month’s cover story (p. 51), signs both macro and micro point to a  fatter pocketbook for American workers, who are seeing an increase in wages as well as all those savings at the pump.

Check nearly any operator poll we conduct, and labor is at the top of the list of things that keep you up at night. Recruitment, training and retention, regulatory mandates and competition—there’s no shortage of forces at play that all seem to be against you running efficient and profitable businesses.

But stop right there. There’s a groundswell of c-store retailers who are changing the conversation—and the paradigm—around labor. Redner’s Markets and Rutter’s Farm Stores have recently become proactive on wages and benefits, joining longtime standard bearers such as Kwik Trip and QuikTrip.

The working class has become disillusioned with the American dream, and I’m afraid neither presidential candidate is going to help remedy that.

But you know who can? You—one employee at a time. And Redner’s, Rutter’s and others are paving the way.

The pro-worker mandates are not ending with wages. Just look at the harbingers of such mandates: San Francisco, Seattle and New York. They’re already past the minimum-wage debate and are discussing the latest issue: predictable scheduling.

And that’s not a bad thing. Wages, predictable scheduling, improved benefits—all of it is forcing businesses to be more efficient and data-driven in their hiring, scheduling and retention processes. That’s good for business, and so are happy employees.

I don’t think any of us disagree that creating a happy, comfortable workforce is a great thing for business and society. Where people across the political and economic spectrum differ is how we get there. The past two years have been a time capsule of a movement that has swept from the streets to Capitol Hill to the boardrooms and budgets of leading retailers. The blanks to fill depend on you.