In the first 24 hours that Tesla accepted advance orders for its mass-market Model 3 electric vehicle (EV), it racked up the equivalent of $7.5 billion in potential revenue. Consumers placed more than 200,000 orders, forking over a $1,000 deposit for a vehicle that will not be available until at least 2017. 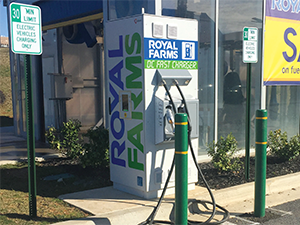 Examples such as this demonstrate the EV market’s incredible potential, persuading convenience retailers such as Baltimore-based Royal Farms that the investment in charging stations is good business. For the chain, the positives go beyond potential increased in-store sales or any profit turned via selling electricity.

“We have a culture of sustainability,” says Thomas Ruszin, fuel and environmental leader for Royal Farms, which has a tagline of “Real Fresh. Real Fast. Real Green.” “We thought EV chargers were just another aspect we could add to our o­ffering that could play into that.”

That culture is evident in the 20 Royal Farms stores certified to Leadership in Energy and Environmental Design (LEED) standards. All new sites are being built to certification standards. Royal Farms sells a biodiesel blend at many of its more than 160 stores and is rolling out diesel exhaust fluid. The green credentials even trickle down to the retailer’s famous fried-chicken foodservice offer: A service picks up used frying oil to process into biodiesel.

So when Maryland announced it was awarding up to $1 million in matching funds to install public EV charging stations as part of its Energy Administration’s Electric Vehicle Infrastructure Program (EVIP), Royal Farms jumped on the opportunity—and snagged 15 of the 26 available grants.

Royal Farms installed the first of the 15 in June 2015 at its Camp Springs, Md., store. As of press time, a dozen in the network were operational, with another three poised to go online soon. The final site will open this fall at a new store under construction. The grants covered half of the total $1.2 million out-of-pocket cost for the EV charging installation, or $600,000.

The chargers get two dedicated parking spots and sit on the outer lot to keep them visible from the road. Each station offers both connector standards—CHAdeMO and SAE—and is part of the ChargePoint EV charging network. Customers enjoy free charging for an EV station’s first 30 days online. From there, the charge is 29 cents per kilowatt hour, with a minimum hookup fee, bringing the average cost of a full charge to less than $10.

While many c-store retailers don’t see EV charging fitting into the convenience occasion—the typical c-store visit is less than 3 minutes, and the fastest full charge currently available is about 10 times that—Royal Farms disagrees. “Our business model really [has] been focused on foodservice, and being a fast-casual place to get something to eat,” says Ruszin. “All new stores have seating. We thought this was a great opportunity for someone to pull in, get a quick charge, come in and get a quick bite to eat. They’re filling their ‘tank’ and filling their stomach.”

Most recently, Royal Farms has seen about five charging sessions a day across its Maryland network. While this does not sound like a big number, it adds up: Since June 2015, the chain has displaced more than 1,100 gallons of petroleum, the equivalent of more than 4 tons of greenhouse gases.

Maryland is not the only state where Royal Farms is expanding into EV. The chain also has a DC Fast Charger in Ridley Park, Pa., near the Philadelphia Airport, and two Level 2 chargers at a site in Bridgeville, Del.

The company plans to build out its Delaware network even more over the next two years, installing two DC chargers each at five sites. This would give it nearly 30 EV charging stations and could make it the most plugged-in c-store chain in the United States.

Royal Farms is not expecting big profits from the EV chargers, but it instead hopes to build upon its reputation as a green company. And there are signs it is working.

“We’ve had some customers call in, saying, ‘I’d never heard of Royal Farms, or never stopped until you got the chargers, and now we’re going to be lifelong customers,’ ” Ruszin says. “They’re glad to see us investing in alternative fuels.”

It is still too early to tell whether the goodwill has translated into increased store sales, or any kind of a profit. But for Royal Farms, that’s beside the point.

“It’s about sustainability for us, and building on our core values,” says Ruszin. “Any return on investment we get, it’s just a bonus for us.”