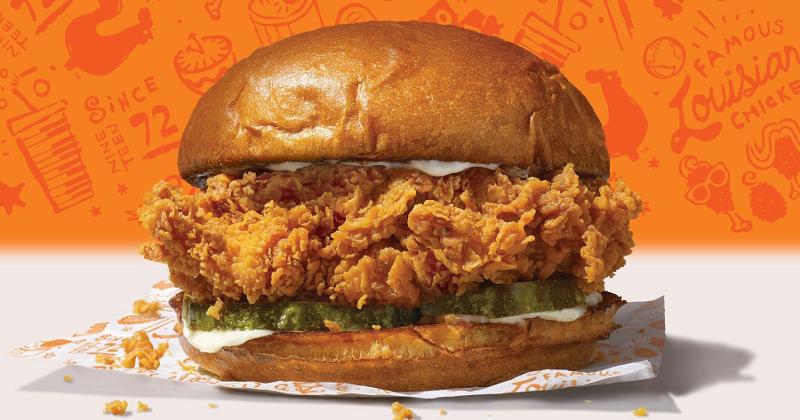 Popeyes’ new classic chicken sandwich, which debuted in August 2019, was an instant viral sensation. The sandwich, which features a buttermilk-battered and hand-breaded white meat chicken fillet, two barrel-cured pickles and mayo or spicy Cajun sauce between a toasted brioche bun, received rave online reviews upon its release and sparked a social media battle with rival Chick-fil-A. Popeyes’ sandwich whipped up such a frenzy that the chain quickly ran out of supplies to make the dish.

After that blockbuster debut, Popeyes relaunched the sandwich in November and is now reaping the rewards: The company’s same-store sales surged 10.2% in the third quarter of 2019—its best performance in five years, according to parent company Restaurant Brands International (RBI) Inc., Toronto, on its third-quarter earnings call.

“The performance of the chicken sandwich far exceeded our most ambitious expectations and brought Popeyes into the national and international spotlight,” said Jose Cil, CEO of RBI, during the call. “When [customers] try the product, they come back for more. That’s what we’re seeing and that’s what we’re excited about.”

Popeyes’ success has opened the door not only for other fast-food restaurants but also convenience stores to highlight fried chicken. While many c-store chains have offered fried chicken sandwiches for years, some have begun specializing in the dish and highlight it as their flagship menu item. But how can c-store fried chicken programs create the same magic as Popeyes?

Popeyes' chicken sandwich attracted new guests upon its launch—many of whom had never experienced the brand or its Cajun-inspired menu before—to see if the hype was legitimate, Cil said during the RBI earnings call.

“We saw a lift in frequency from existing guests and customers and fans or superfans that know the Popeyes brand quite well,” he said. “We also saw new folks come in to try it—a lot of it driven by the buzz online around the so-called chicken wars.” Cil was referring to Popeyes’ heated competition in 2019 with chicken QSRs Chick-fil-A and KFC for consumers’ loyalty.

“A great chicken program is planned over time—it’s not a short-term fix.”

This success didn’t happen overnight. Popeyes spent years developing its famed chicken sandwich, says Larry Reinstein, CEO of restaurant consulting firm LJR Hospitality Ventures, Dallas. Every part of the sandwich, from the batter and flour to the types of pickles and buns used, took months to test. Long-term planning is key in implementing a fried-chicken program, he says.

“People often want to do things quickly,” Reinstein says. “A great chicken program is planned over time—it’s not a short-term fix.”

But developing the chicken sandwich went beyond testing the ingredients. To create the “perfect” chicken sandwich, Popeyes also had to craft a mission—a long-term purpose for the item, says Reinstein. This meant considering what its future profits would look like, who the sandwiches’ core consumers would be and what brands it would directly compete against. This is why Popeyes called out Chick-Fil-A during the launch.

“Know what the mission is and what you’re trying to do with the chicken program,” Reinstein says. “Establish who your competition is and whether or not it will be a difference maker in your market.”

Popeyes’ sound planning and execution of its chicken sandwich allowed the QSR to reinvent itself in the eyes of consumers, says Jay Cipra, president and CEO of equipment manufacturer and fried chicken supplier Broaster Co., Beloit, Wis. With consumers increasingly seeking fresh chicken through a variety of outlets, c-stores now have the chance to do the same.

“As foodservice grows in c-stores, fried chicken allows chains to expand their offerings and reinvent themselves as true foodservice providers,” Cipra says.

Social-media buzz also contributed to Popeyes’ success, says Allison Shapiro Dandry, director of communications and technology for Krispy Krunchy Foods LLC, Alexandria, La., a c-store-based quick-service restaurant (QSR) chain that specializes in fried chicken. Weeks before the sandwich even debuted, Popeyes ran social campaigns on Instagram, Facebook, Twitter and other outlets about the product to build consumer interest. Popeyes tweeted the following statement Aug. 12 alongside an image of its new sandwich, right around the time of the launch:

“By pushing the chicken out online, consumers will know that you offer it before they enter the store.”

Not only did quirky social posts increase the hype around the sandwich but it also gave the Popeyes brand a voice and a persona—something that c-stores could benefit from creating too, Dandry says.

“Many QSRs are coming up with their own brand personalities online,” she says. “Customers talk to them daily in the social-media sphere, and you can see how these brands speak to their consumers.”

Having a strong social media presence is a priority for fried chicken QSR Chester’s International LLC, says William Culpepper, vice president of marketing for the Birmingham, Ala.-based company. While Chester’s—which has locations at 115 Love’s Travel Stops & Country Stores, Oklahoma City—doesn’t have the following or reach of Popeyes, the company has worked with Love’s to connect with customers and attract new ones through social media, he says. In 2019, Love’s debuted the new Chester’s Fried Chicken Sandwich, a fried and marinated chicken breast with crinkle-cut dill pickles in a brioche bun that retails for $3.99.

“It is important for c-stores to be active on social media, to engage with their consumers and to show some personality,” he says.

But social posts do more than build the brand persona. They also ingrain a certain message into consumers’ minds: “We sell this,” Dandry says.

“People often enter c-stores without realizing the chicken is there,” she says. “Then they smell it or see the sign and get it. By pushing the chicken out online, consumers will know that you offer it before they enter the store.”

Reinstein agrees. Everyone involved with the c-store operation, from the leadership team to in-store employees, should know about the product and its mission. Having all team members involved in building the buzz is the first step in creating a story for the programs.

“When you have something great, you have to tell its story,” he says. “The social-media marketing must revolve around that. Popeyes did a great job at telling their story.”

3 Steps to a Successful Foodservice Program