HOUSTON -- In its effort "to get bigger, grow faster," CITGO has incorporated a number of unique programs that it hopes will provide multiple reasons for petroleum retailers to sign on with the brand. 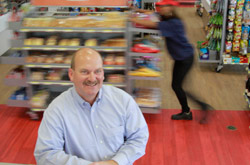 Over the years, CITGO developed a reputation of varying its contracts to better support marketers in the field. "We want to avoid being cookie-cutter," Flagg told CSP Daily News. "A lot of majors dropped their lines in the sand [with fuel volume minimums], but we've built our success on being flexible with customers, understanding markets and, yes, recognizing higher quality standards but knowing they're not the same in every market."

The growth effort comes seven years after CITGO, a subsidiary of Petroleos de Venezuela SA, made the decision to pull out of 10 Midwest states as parent PDSVA became a source of concern as international politics grew tense. It was in 2006 that the company decided it was better off basing its supply around its three refineries (one each in Illinois, Louisiana and Texas) and its network of company-owned terminals.

In the years since, the U.S.-run CITGO flew under the radar, becoming one of Venezuela's greatest assets, according to Tom Kloza, chief oil analyst for OPIS, Gaithersburg, Md. It has done so by staying independent.

"The tendency is to believe that PDVSA just wanted to force-feed its crude [to CITGO]. That's not the case," Kloza told CSP Daily News. CITGO is "diversified in what they run, taking advantage of North Dakota [supply] … Eagle Ford Shale. … They're the beneficiaries of some of the cheapest sweet crude."

Its supply-chain flexibility is an important tool, especially as pressures build for fuel brands to retain and grow their distributor base.

Flagg noted that competing fuel suppliers are doing all they can to build their businesses, and he believes in CITGO's current strategies--even the retention of its network of owned-and-operated terminals.

Kloza said the company is an anomaly in that competitors have sold off those assets. But Flagg said the company believes in its current go-to-market tactics and has the profits to prove it.

Fuel suppliers "need loyal marketers," Kloza said. "They have to do things to help them pump up the volume and help them prosper. Everyone is recognizing that now."

For a full account of CITGO's move into a new growth period and its new concept store, see the July issue of CSP magazine.