WAWA, Pa. -- The angled, wing-shaped canopy that covers Wawa’s fuel islands is as powerful a branding tool as the price sign—if not more so. How it came to be an iconic element of the chain’s sites is a story about how design can elevate a brand.

In the mid-1990s, the Wawa, Pa.-based chain was looking to enter the gasoline business and wanted to make a statement with its fuel island. Mariellyn Zeock served as Wawa’s manager of architectural design at the time. She had never designed a fuel canopy before but was tasked with coming up with design ideas for that first fuel site in Millsboro, Del. So she drove around the area to look at local examples.

“I noticed that they were all the same—all really heavy on top,” Zeock, now retired, told CSP Fuels. “What if we just made it lighter, thinner and exposed the structure?”

The architectural team—which included Zeock and the late Jim Dodrill—got the go-ahead to pursue the idea from Peter Gilligan, then director of construction and engineering (and the recently retired vice president of real estate for Wawa). Dodrill worked with lighting designer Kristin Keilt to mock up a preliminary model of the canopy. 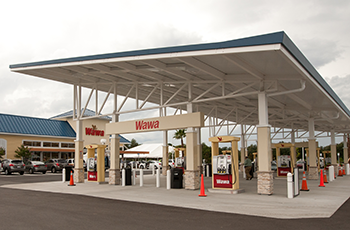 “Jim and I had a very synergistic relationship,” Keilt told CSP Fuels. “He would not just design the form and hand it off to me to light it—we would have the key conversations, and ask the right questions.”

Dodrill and Keilt wanted to design the canopy around people, so they visited competitors’ sites at night to get a feel for the market norm.

“Everyone seemed to be creating canopies that were a glare source—a high level of glare and a high light output,” said Keilt, who today oversees lighting design for Lowe’s Cos. Inc., Mooresville, N.C. “It started to become a gas-station war on brightness. What that tended to do to the entire site was disable somebody from comfortably pulling in at night to a gas station.”

The team’s aim was to design a canopy that welcomed customers. They used layers of vertical light and lowered the light and wattage levels typical for the time. (The lighting scheme was so unobtrusive it won a “Good Neighbor” award from a dark-sky association.)

“That’s something that was really disruptive at that time in the industry, where everyone was racing to the brightest light,” said Keilt. “And we were really doing the opposite.”

The team also played with the placement of the canopy of itself. Dodrill designed the fixture to tip at an angle, so that lighting was reflected on the c-store rather than the customers below.

“We were doing a lot of cardboard, wood mockups, shining light on it; we were really playing in that space in thinking about the human condition there,” said Keilt.

They also gave the canopy a split wing shape. Norman Turiano, principle of Turiano Strategic Consulting, Cape Coral, Fla., and fuel pricing manager for Wawa at that time, said the canopy was meant to not only evoke the wings of Wawa’s goose icon, but also to highlight the chain’s foodservice-focused c-store. “There was a fear going into fuel that a forecourt with 16 pumps would block it,” Turiano told CSP Fuels.

Because of the design’s uniqueness, the team knew it needed to help Wawa executives better visualize the experience. So they created a video rendering that placed the viewer at car level and moved them through the site.

“We knew we needed to really expand that visualization for them to get the concept won,” said Keilt. “It was not [out of] ego that we designed it; it was really for those customers that we wanted to create a wonderful environment.”

This effort was especially critical because that first prototype was at least three times more expensive than a standard canopy, which created some pushback from the chain’s budget watchers, said Zeock. But the design had a powerful fan: Dick Wood, then CEO and today chairman of the board.

“Dick Wood wanted it, and Dick gets what he wants,” said Turiano. Wood was willing to invest money if it enhanced the Wawa brand image. The winged canopy did just that.

That’s not to say the iconic design remained a permanent fixture of Wawa sites. There was a brief period during the recession when Wawa retired the winged canopy for a standard, rectangular model as money got tight and the desire to build more stores pressured construction budgets, said Turiano.

But after about a dozen locations with an “out-of-the-box” canopy, Wawa returned to the angled design. This was partly at the urging of its design firm, New York-based CBX. It was also partly because of the timing: The retailer, which today has more than 700 stores, was about to make a big push into Florida.

Wawa and CBX have updated and tweaked the canopy’s design over the years, but 20 years later, it still retains its original, unique shape. This is a testament to its timeliness and fit.

“We had a very distinct visual language that supported the brand, and [Wawa was] a different competitor in the market, and they stood apart,” said Keilt. “All of those architectural elements together combined in a holistic way to really amplify their brand messaging.”

“I wish Jim were still around to see they went back to the canopy,” said Zeock of Jim Dodrill, who died in 2010. “It was a group effort.”