CHICAGO -- What do sensuous actress Penelope Cruz, the Beverly Hillbillies' Jethro Bodine and oil reserves have in common? 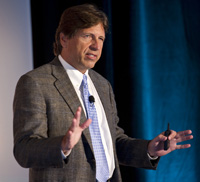 Nothing really, unless you're petro-tainer Tom Kloza, whose bag of parts and props punctuate his oftentimes amusing presentations.

Closing out Wednesday's general session of the NACS State of the Industry Summit in Chicago, the unconventional OPIS publisher and chief oil analyst blended his typical coarse humor with impressive insights about oil trends, commodity markets, and global-to-local retail relationships.

Is Kloza politically incorrect? Absolutely and that's, several retailers said, what makes him refreshing amidst a chorus line of choreographed pundits who dominate much of today's media.

His 45-minute slide show featured a reel of 1960s through '90s pop culture, tapping sports, mafia images and television icons as metaphors for the often complex labyrinths that make up today's fuel markets.

"The genie is out of the bottle," he said, a slide of Barbara Eden's I Dream of Jeannie character backing him up.

Kloza then summarily eviscerated the thesis presented earlier by Fox Business Network contributor Phil Flynn, who had defended the practice of commodity traders for injecting important liquidity to the crude markets.

"This market needs extra liquidity like Charlie Sheen needs liquidity or Lindsay Lohan needs liquidity."  There is more than enough legitimate money in the market, he said, without the chaos attributed to futures speculators who invest based on questionable assumptions instead of on-the-ground reality.

"We know demand for gasoline in the United Sates … shrunk," said Kloza of last year's retail picture at the pump. Yet, he continued, the paper market for boutique fuels grew 30%.

As is his wont in these public formats, Kloza hopscotched, covering a number of issues rather than dwelling on a single topic.

*Diesel: Outside of the United States, diesel has emerged as the fuel of choice. "Diesel fuel, not gasoline, will be the hot global fuel of the decade," he said.

*Future Markets: Oil reserves, he said, will move over the next couple of decades to the Western Hemisphere.

*High street prices. "Blaming [President] Obama on this is like blaming President Bush if your home value went down from 2004-2008. … There are greater forces at work."

*Growing Markets: While the Middle East and North Africa are home to much of the world's readily accessible oil supplies, Kloza says consumption will continue to accelerate in China, India and Russia. Much of this growth is fueled by economic expansion, a growing working-to-middle class sector in these populous nations, and a widening transportation network.

The next six to nine months should be a fascinating rollercoaster ride, Kloza said. The spring season should reverse some of the major spikes in crude oil and an unusually warm winter and accompanying lower heating bills will spur motorists to drive more, thereby increasing what has been declining consumption at the pump.

But expect the summer to rekindle higher prices, in part, because of reformulated fuels mandated as part of the federal Clean Air Act, which reduces the number of available blends and total output.  Comparing gasoline to an ingredient, he said, "It's much more difficult to bake a reformulated cake."

For 2012, at least, Kloza expects the national average to stay under $4 per gallon, barring sudden news overseas. And when rhetorically asking himself whether oil markets will age gracefully, Kloza returned to his slides: A picture of Dos Equis' "Most Interesting Man in the World."