As drivers shifted into gear this summer and hit the open road, they probably headed to the gas station to fill up the tank. For some, that means one thing—pumping E15 fuel into their vehicles. 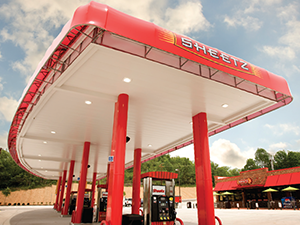 A better selection, a better value

Sheetz, a chain of convenience stores based in Altoona, Pa., with locations in Kentucky, Maryland, North Carolina, Ohio, Pennsylvania, Virginia and West Virginia, is currently the largest retailer of E15 fuel. According to Mike Lorenz, executive vice president of petroleum supply for Sheetz, the decision to add E15 gas to Sheetz locations had to do with offering consumers more choice.

“We have an amazing selection of made-to-order food, ready-to-eat food, snacks and beverages to choose from inside the store, so we thought it was time we improved our offers on the forecourt as well,” Lorenz says.

But it wasn’t just choice—it was also about offering a good value to consumers. “We like that we can sell it for less than 87 gas,” Lorenz says. “The consumer is very price-sensitive. As little as 3 cents a gallon can change their buying behavior, so we’re currently selling it for 5 cents less than 87.”

Not all consumers know what E15 fuel is yet, or have heard of its benefits, but the good news is that knowledge and buzz surrounding the higher octane fuel is spreading, thanks in part to its wider availability at gas stations and c-stores. This increase in availability comes at an ideal time—E15 is now approved for use in vehicles with a model year of 2001 or later, which amounts to about 90% of vehicles on the road today.

But when it comes to attracting more buyers, Lorenz says that the biggest challenge is educating them about the benefits that E15 offers. “It’s cheaper, it’s cleaner burning, it’s higher octane, which is better performing,” he says. By offering it at more locations, Sheetz can spread the information to more consumers.

Making it available to the consumer at a location that’s at least relatively close to them has been a priority for Sheetz, says Lorenz. The retailer held off on marketing E15 fuel, noting that a concern until recently had been its limited availability. Nowadays, though, E15 fuel is offered at several chains of c-stores across the United States, but Sheetz is the top seller—E15 fuel is available at more than 190 Sheetz locations in five states. If consumers are looking for it in their towns, it seems it’s only a matter of time.