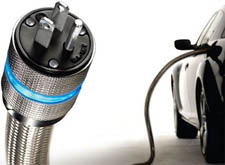 The additional fee, which would hike the state's standard license plate renewal cost to $100 annually, is among a lengthy list of recommendations contained in a report forwarded to members of the Illinois General Assembly and Governor Pat Quinn by the state's Electric Vehicle Advisory Council.

Kate Tomford, an energy specialist at the Illinois Department of Commerce & Economic Opportunity who chaired the committee, said the group chose an "aggressive" goal to signal to the EV industry that Illinois is serious about expansion.

"We did that intentionally to set a higher bar," Tomford told the newspaper.

A number of industry experts predict Illinois will see between 18,000 and 20,000 EVs on its roads by 2015. Some put the estimates as high as 80,000. The 100,000-mark representatives one-tenth of President Barack Obama's goal of getting one million electric vehicles on the nation's roads by 2015.

In addition to bringing more EVs to the streets, the council said it wants lawmakers to approve changes in state law to help jumpstart development of charging stations, said the report.

The council wants the General Assembly to ensure that charging stations are not regulated as public utilities.

Ken Mikulecky, who is involved in an initiative to establish Normal and Bloomington, Ill., as model EV communities, said the idea is to encourage private sector investment in the infrastructure. "The document we've submitted will help prepare the state for growth in [EVs]," Mikulecky, who works for the Farnsworth Group engineering firm, told the paper.

"That's the kind of infrastructure that will prompt people to use the technology," Jonathan Goldman, electric project manager for I-Go car sharing service in Chicago, told the Pantagraph.

Among the council's long-term goals is to convince members of Illinois' congressional delegation to support a plan that would change a $7,500 federal tax credit for EV purchases to a rebate at the time a vehicle is purchased.

Quinn administration spokesperson Brooke Anderson told the paper that the governor does not intend to push for the higher fee this spring. If approved, however, the additional fee would bring in an additional $9 million to help finance a rebate program that could be worth as much as $4,000 for each electric vehicle.

Separately, Kansas State Representative Tom Sloan (R)  said he is worried about how his state will pay for road and bridge projects if consumers flock to EVs and stop paying gasoline taxes, said an Associated Press report. His solution is for the state to impose a new fee on the power used by EV owners when they charge their vehicles, either at home or in public charging stations.

But a bill he is pushing received a cool reception during a House Energy & Utilities Committee hearing.

General Motors Co. opposes the idea, and a spokesperson suggested such a tax could discourage EVsales and help kill the industry in its infancy. Legislators also worried that car owners would be forced to spend hundreds of dollars to install separate meters in their homes.

Under Sloan's bill, consumers who charge their EV at home would be required to have a separate meter to track how much electricity they use. The Kansas Department of Transportation would set the fee so that it is equivalent to the state's taxes of 24 cents a gallon on gasoline and 26 cents a gallon on diesel. Sloan said he believes that it would amount to less than one cent for each kilowatt hour of electricity.

GM spokesperson Jeffrey Perry, who testified during the hearing, told AP that the company knows of no state that has imposed such a tax. Washington state last year considered but rejected a flat $100 annual fee for EVs.

Perry said imposing a new fee is premature and would send the wrong signal to consumers about whether they should buy EVs. Such a tax also would discourage auto manufacturers, he said.