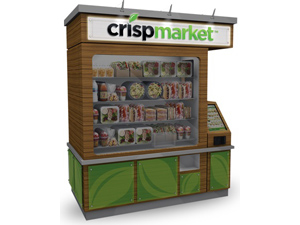 Outerwall said that it expects the wind-down process to be substantially complete by the end of the first quarter of 2014. Outerwall will continue to invest in the rollout its ecoATM recycling kiosks, as well as a limited investment in its SAMPLEit consumer sample-vending kiosk concept, it said.

"These actions are consistent with the plans we outlined earlier this year and ensure that Outerwall's operations drive enhanced value creation for both our shareholders and retail partners," said J. Scott Di Valerio, CEO of Outerwall.

Due to the decision to discontinue those three new venture concepts, the company expects to record an associated one-time, pre-tax charge of $26 million to $29 million in the fourth quarter of 2013. Beginning with the company's fourth-quarter 2013 results, the three concepts will be reported as discontinued operations, along with Orango electronics-vending kiosks, which was discontinued earlier this year.

"This comprehensive review reaffirms our confidence in Outerwall's solid foundation, notably our core Coinstar and Redbox businesses and the company's strong cash flows. At the same time, ecoATM provides the potential for another meaningful pillar in our automated retail platform, and we believe SAMPLEit merits a continued investment based on the potential we see in the business. By focusing on the new ventures with the greatest opportunity, we expect to move toward breakeven segment operating results more quickly," Di Valerio said.

The company also announced a leadership transition as Redbox president Anne Saunders has left the business. Leadership responsibilities for Redbox will be managed on an interim basis by the existing Redbox executive team, overseen by Di Valerio, until the position is filled on a permanent basis. Outerwall will commence a search and expects to fill the role in the coming months.

"I am confident in the future of Redbox and the Redbox executive leadership team which will continue its work to drive the business and ensure a smooth transition to the next president," said Di Valerio. "We are making progress with our initiatives to drive incremental rentals by continuing to provide new releases and interesting content at a great value to our consumers, generating value for our company and our retail partners. I want to thank Anne for her contributions at Redbox."

"We believe the organizational changes we are implementing are necessary to better align Outerwall's cost structure with revenue growth in our core businesses to ensure that we are driving the highest returns for our shareholders," said Di Valerio.

The initiatives also include a $350 million expansion of Outerwall's existing senior secured credit facility, which will enable the company to meet its previously announced target leverage ratio in first-quarter 2014.