ALLENTOWN, Pa. --In a deal that will lead to additional dropdowns to its ally CST Brands Inc., CrossAmerica Partners LP has entered into definitive agreements to purchase all the outstanding shares of Erickson Oil Products Inc. and certain related assets for $85 million. 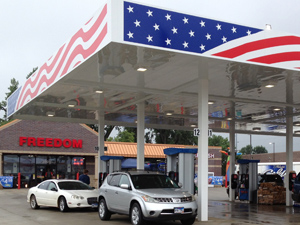 As reported in a 21st Century Smoke/CSP Daily News Flash, Hudson, Wis.-based Erickson Oil operates 64 convenience stores located in Minnesota, Michigan, Wisconsin and South Dakota, with a concentration in the Minneapolis/St. Paul region. The stores operate primarily under Erickson Oil's own proprietary store brand, Freedom Valu. Of the 64 store locations, 59 are owned fee simple with the remaining sites being leaseholds.

For the 12-month period ending Oct. 31, 2014, the locations sold approximately 68 million gallons of motor fuel and had approximately 95 million in non-fuel revenue at the stores.

CrossAmerica Partners initially intends to operate the Freedom Valu convenience stores, but it expects to transfer the operation of certain sites over time to CST Brands, the parent company of CrossAmerica's general partner, CrossAmerica GP LLC, and one of the largest independent retailers of motor fuels and convenience store merchandise in North America, under the Corner Store and, with CrossAmerica, the Nice N Easy Grocery Shoppes retail banners.

"This acquisition will enhance Erickson's growth and competitiveness, and create new opportunities for our customers, employees and communities," said Gary Vander Vorst, president of Erickson Oil.

"We are delighted to acquire the high-quality Erickson portfolio as well as to enter into a promising new market," said CrossAmerica Partners' president and CEO Joe Topper. "The Erickson family built a great organization with high-caliber employees and a strong work ethic. Along with our partners at CST, we expect to continue to grow the Erickson platform to further expand in the region."

The transaction is subject to customary closing conditions, and the companies expect it to close during the first quarter of 2015.

The partnership has long-term established relationships with several major oil brands, including ExxonMobil, BP, Shell, Chevron, Sunoco, Valero, Gulf and Citgo. CrossAmerica Partners ranks as one of ExxonMobil's largest distributors by fuel volume in the United States and in the top 10 for many additional brands.