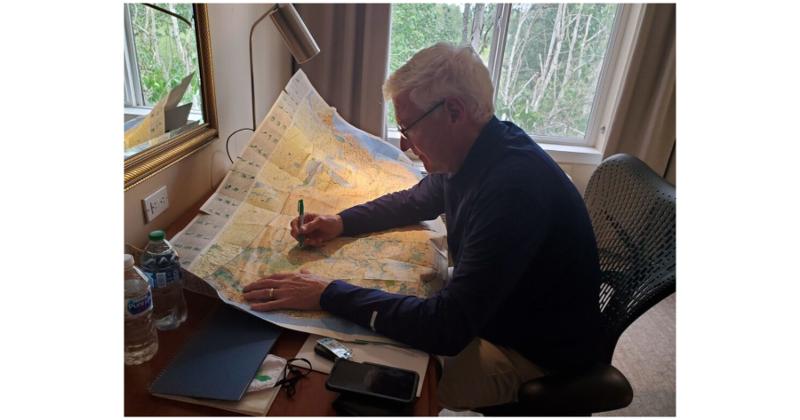 Photograph courtesy of the Cholangiocarcinoma Foundation

ALLENDALE, N.J. — A familiar face to many convenience-store retailers, confectionery industry veteran and Candy Hall of Famer Dave Fleischer recently commenced a 15,000-mile “Journey of Hope” in memory of his daughter Sarah, who died from Cholangiocarcinoma in 2018.

In a road trip up, down and across the 48 contiguous United States, Fleischer’s trip aims to raise awareness and money for the Cholangiocarcinoma Foundation (CCF), whose mission is to find a cure and improve the quality of life for those affected by Cholangiocarcinoma, cancer of the bile duct.

Fleischer began his journey from Orem, Utah, on May 20. “The purpose of the trip is to increase awareness of Cholangiocarcinoma while also raising money for the foundation,” he wrote in a blog post. “Additionally, and very importantly, I intend to honor the memory of my daughter, Sarah. … Sarah, would have loved to do this trip with me!”

Now retired, Fleischer’s contributions to the confectionery industry spanned over four decades, starting after college with Warner Lambert, before moving into key positions with Cadbury, Kraft and most recently as vice president of trade relations at The Promotion In Motion Cos.

Always passionate about his work, Fleischer was inducted into the Candy Hall of Fame in 2009, having served in countless leadership roles across within the industry.

The Promotion In Motion Cos. (PIM) is now sponsoring Fleischer on his journey, which includes stops in at least 15 towns named Hope, where he will meet with current CCF warriors and caregivers. He will also include stops to give thanks at hospitals and research facilities working on a cure for Cholangiocarcinoma.

“We are so proud to support Dave as he makes this incredible trek across our country and honors the memory of his daughter Sarah,” said Michael G. Rosenberg, president and CEO of PIM. “Dave has been a dedicated candy industry leader, a friend, mentor and spokesman who has made an indelible mark on so many throughout his career. The journey Dave is embarking on to help raise awareness and funds to arrest Cholangiocarcinoma is just another instance of Dave selflessly stepping up to assist others and make a difference.”

Based in Allendale, N.J., The Promotion In Motion Cos. is one of the world’s largest makers of fruit snacks, fruit rolls, chocolate and non-chocolate confections, and other snack foods and treats.