LAVAL, Quebec -- Rebranding of the current global Couche-Tard convenience-store and gas-station network begins in January 2016, with The Pantry’s Kangaroo Express stores, as well as existing Circle K locations, in the Southeast, then moving westward across the continent in a modern version of commercial manifest destiny. 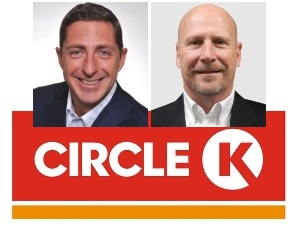 Couche-Tard is consolidating its Circle K, Kangaroo Express, Mac’s and Statoil retail brands under one refreshed banner worldwide, creating a new convenience brand, Circle K. Following the start of U.S. conversions--the company said it expects them to take about three years to complete--customers will see it on gas stations in Europe starting in May 2016, while Canadian customers outside Québec will see the new Circle K brand starting in May or June 2017.

But this focus on rebranding existing stores does not mean Couche-Tard is still not making acquisitions. As president and CEO Brian Hannasch announced the rebranding initiative at a meeting and conference call on September 22, the company was closing a deal to acquire 13 Fast Max convenience stores in Indiana from Kocolene Marketing LLC, Seymour, Ind.

“We do acquisitions all the time,” Darrell Davis, senior vice president of operations, Couche Tard, told CSP Daily News. “Any new-to-industry (NTI) stores will get the new Circle K brand image as soon as it’s available.”

He said that the Fast Max stores “are being considered NTI.” The chain would not rebrand these stores to the current Circle K identity now only to replace it in January with the new Circle K branding. “But as soon as it is available, they will get the new Circle K image.”

Davis is taking the lead for the Kangaroo Express transformation, which the company will complete within six to nine months.

Davis provided some insights into the rebranding decision.

He said the main disadvantage, of course, is loyalty to the old brands.

“You’ve got the heritage brands that have value in the markets that they are in,” he said. “Do we want to risk that? But we came to the conclusion that we’re all about good people. So we’re not changing any of the people in any of the markets or any of the stores; therefore, being united under one brand, we think that what our people do day in and day out would give us confidence that we can overcome that disadvantage.”

According to Hannasch, market research suggested that consumers would favor the rebranding.

“We looked at preferences in both U.S., throughout Canada and in five or six countries in Europe on how this [new] brand compared to the existing brand in terms of customer acceptance, warmness and other factors, and it scored very well," he said. "Our heritage brands scored well in most of our geographies, but the new brand scored even higher. The closest was Couche-Tard and the new logo, where they scored almost evenly.”

The company described the thinking behind the new logo on its website: “Our new Circle K logo has been created to be clean, fresh and relevant, and to incorporate the many great assets of our existing brands. It includes circles in both the symbol and the wordmark or text-based element, illustrating wholeness, unity and teams. Ensuring our circle is open and not exclusive, one leg of the K intersects the circle, welcoming our customers and communities.

“The capital letters in the wordmark denote solidity, stability and competence, while flat, clean forms ensure the logo will remain fresh and current.

“The strong red color in the logo harks back to the Couche-Tard, Mac’s and Kangaroo Express logos. Red has long been recognized as a color associated with convenience retail. The orange color in the logo comes from the Statoil brand. It accents, underlines and brings distinctiveness to lift our color scheme above the ordinary. The warm colors in the scheme merge and become reminiscent of the sunrise—inspiring, every day.”

Perhaps one of the biggest decisions for U.S. consumers is the branding on fountain drinks. Kangaroo Express’ Roo Cup has a strong following. In its fifth year, the Roo Cup is a $6.99 collectible cup refillable with any fountain and frozen beverage for 25 cents. Circle K’s Polar Pop, which has already been introduced at some Kangaroo Express stores, also has a strong fan base. It is a special foam cup that claims to keep a beverage colder longer, refillable for 69 cents. 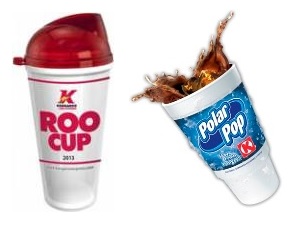 “That’s something we’re investigating,” said Davis. “How does that fit in with Polar Pop? How do we unite those? That has not been determined yet.”

He said, “The reason Couche-Tard has been so successful in acquiring stores is that we take best-in-class practices from any company that we acquire and implement that in all of our stores, if it’s applicable. We’re global and regional—we’re a decentralized model. The products that are closer to the customer are going to be different from region to region. But if we have a brand that we say we’re famous four, then we’re going to unite under whatever that is.”

In Europe, Couche-Tard operates a retail network across Scandinavia (Norway, Sweden and Denmark), Poland, the Baltics (Estonia, Latvia and Lithuania) and Russia. It includes 2,229 stores, most of which offer fuel and convenience-store products, while the others are unmanned automated gas stations.

Approximately 4,700 stores are operated by independent operators under the Circle K banner in 12 other countries or regions worldwide (China, Guam, Honduras, Hong Kong, Indonesia, Japan, Macau, Malaysia, Mexico, the Philippines, the United Arab Emirates and Vietnam), which brings to more than 14,900 the number of sites in Couche-Tard's global network.