In developing a short list of markets prime for c-store development, CSP found a divining rod in that notion of “young and vibrant” that extends past demographics and into lifestyle perks such as music festivals, dog parks and wine bars.

“Nashville is undergoing a true transformation with an influx of new residents and businesses that provide a foundation for continued growth,” Milam says, describing a lengthy internal process of studying growth patterns, expert reviews and community recommendations that led to the company’s decision. “We believe the city’s young, vibrant population, along with the growth in commuting and mobile workplaces, is a natural fit for RaceTrac.” 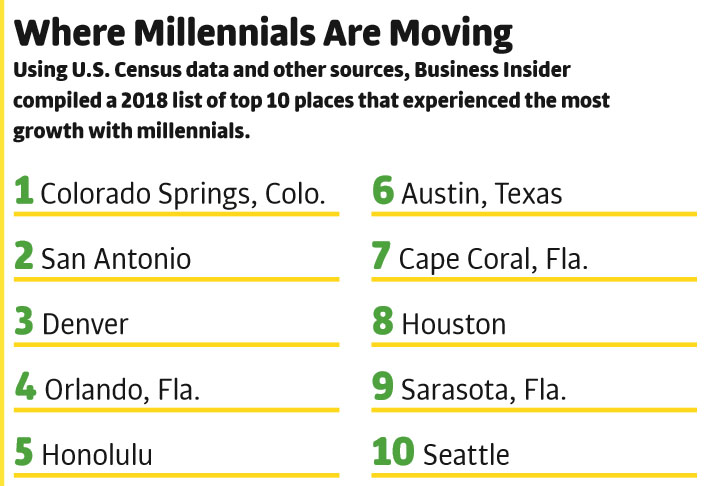 Now ages 22 to 37, millennials have forever been a moving target for businesses trying to ride the peaks and troughs of cash flow. To that end, the target for retailers may now be where millennials are moving.

And the power of millennials is only growing. Millennials will outnumber baby boomers by 2019, growing to 73 million compared to the once-dominant boomer segment, which will decline to 72 million, according to the Washington, D.C.-based Pew Research Center.

As more retailers rev up to chase millennials, some of America’s historically alluring cities will lose their luster. In its study of 2015 data, SmartAsset, a New York-based financial-research firm, said the Big Apple saw the biggest loss in millennials among major cities. The six cities with the highest losses during its study period were New York, San Diego, Miami, Houston, Las Vegas and Chicago. SmartAsset said one of the biggest reasons millennials may be moving is that they’re attracted to cities with booming economies, implying that millennials are seeing less opportunity in these big-name, more established markets.

The Midwest did not fare well in the study. It was not represented among the top 10 states where millennials are moving. And Ohio and Michigan ranked in the bottom 10 of the SmartAsset study. Conversely, the top five states desirable to millennials are Texas, Washington, Colorado, North Carolina and Virginia.

Cities such as Honolulu, San Francisco and Washington, D.C., score high for percentage of millennials and, more important, the number of millennials moving in. Unfortunately, those cities can be too expensive for retailers, both in terms of property development and day-to-day operations.

Other mitigating factors to retail growth potential include:

Economic diversity. A city’s reliance on a seasonal population or a single business sector can leave it vulnerable to spells of feast or famine.

Competition. A promising new investment can suddenly wither when a smarter operator or a cross-channel competitor enters the scene.

Net-growth rates. An influx of new bodies and employers is preferable to a market where the people are merely shifting from a suburban to an urban lifestyle (or vice versa).

Insider knowledge. A tough market for one retailer may prove a winning bet for another, with local expertise, business relationships, brand strength, appropriate format and ability to work with area municipalities offering a competitive edge.

That hometown advantage is also a factor in how retailers define a “new” store. Joseph Bona, president of Bona Design Lab, New York, says most of his clients are looking internally, reinvesting in current infrastructure.

“People are taking advantage of what they have,” Bona says. “They’re reinvesting in existing networks vs. new markets and new real estate.”

Such is the case with QuikTrip. “We’ve been focusing on new stores for existing markets for the past five or six years,” says Mike Thornbrugh, manager of public and government affairs for the Tulsa, Okla.-based chain. “We like where we are and where we have enough room, so we’ll tear down existing facilities and build brand-new ones. Maybe 20 years ago the spot was great, but maybe today, down the street is better.”

That’s not to say that QuikTrip is sticking close to home. Last year, officials announced a major expansion into Austin, Texas, and San Antonio, where the chain bought 18 properties this past spring.

Those two Texas towns repeatedly come up in top lists for growing economies, as well as desirable places to live for both boomers and millennials.

If Jim Fisher, CEO of Houston-based IMST Corp., were taking a red Sharpie and drawing a circle around hot regions in which to build new c-stores, he’d start at the southern tip of Florida, circle north over the Carolinas and go west over all the Gulf states to rein in San Antonio and Austin, Texas.

The energy sector is playing a big role in this region, despite having hit a bust cycle earlier this decade. “It’s back now,” says Fisher, whose company helps retailers determine locations for new builds, existing facilities upgrades and potential markets to develop. Many Southern cities such as Houston have moved beyond relying on the energy industry for their livelihood, broadening their economic bases.

The true impetus to get people to relocate to southern states is what Fisher calls a “phenomenal lifestyle” that is especially attractive to people from the Northeast and Northwest. “Life can be as good as it is there,” he says, “but with a better cost of living.”

Attractive markets have strong, diverse economies, as well as all the amenities that a workforce wants to be around. This creates a chicken-or-the-egg scenario, Gross of RGDE says.

“Stuff is happening in the streets, live music, theater, art; it’s a lifestyle young people want and will move to after college,” he says. “If the labor force is well-educated and just starting out, that attracts employers. They’ll move there because of the labor force, bring their own employees and feed a cycle of growth.”

However, there is a caveat: Net population growth within a market is critical, Gross says. For example, asset management firm AllianceBernstein recently moved 1,100 employees from its Wall Street digs in New York to Nashville. It’s a net growth for Nashville, but part of an ongoing decline for metro New York and New York state.

“Cities like New York, Chicago, Pittsburgh and Cleveland have downtowns that are booming,” Gross says. “But Illinois, for instance, has been losing its population for six or eight years. Young people and empty nesters may be moving downtown, but there’s not enough regional growth to drive the economy.”

Beyond macro-level concerns, certain ground-level details are important when choosing specific locations, Gross says. For convenience stores with fuel, the first thing is traffic count. “Ultimately, you’re trying to capture cars, not people,” he says. “It’s about the direction of traffic, rush hour and volumes of traffic passing by.”

Chasing the flow of people is part of the formula for Murphy USA. After a 20-year relationship with Walmart, Murphy severed ties with the big-box retailer in 2016. As Murphy completes its upgrades of stores that are still on Walmart lots, it looks to expand elsewhere.

“And by definition, that’s going to be more of an in-field at those high-traffic locations away from the Walmart Supercenter,” said Andrew Clyde, president and CEO of El Dorado, Ark.-based Murphy, during a May 3 investor call. “So it’s less about saying, ‘Hey, we’re going to go attach our reins to grocery store A or mass-merchant discounter B or home-improvement store C.’ It’s about traffic. The supercenter has been a great proxy for that, but it’s not the only proxy.”

Along those lines, knowing about households in the area as well as local industry is a priority, Gross says. Those numbers correlate to traffic flows not just when people are at home but when they’re at work.

In addition to understanding traffic and forecasted household trade-area spending patterns, knowing who the competition is and who else is on competitive routes is also important, Gross says. In a way, retailers need to predict the potential for competition—and opportunity. For example, an agricultural area could suddenly be rezoned for residential, office or mixed use.

For many retailers, the evolving c-store-with-gasoline format already defines where a new store can go, says Bona of Bona Design Lab. With core categories such as cigarettes and fuel on the decline, food and beverage have become critical industry drivers. “We feed people more than anything else,” Bona says. “In order to feed people, you need bigger lots, more parking. You’re looking for the kinds of real estate … to dig up and build sites to accommodate these offers.”

Finally, retailers should never underestimate the local communities, Fisher of IMST says. For example, when he arrived at a project in Kansas, he was met by two dozen city representatives, including the mayor, director of economic development and local CEOs of major companies in the area.

“They were all saying, ‘We’ll do whatever it takes to get this [travel center] off the ground,’ ” Fisher says. “I turned right around and was in the Northeast, and [that city] did everything they could to stop the project. They put up roadblocks like there was no tomorrow.”

Often, a major sticking point in working with city officials can be the very format of a c-store with gas, says Gross. “I work with a lot of neighborhoods, and design often kills these deals,” he says. “Some large chains will want to do a generic design, with a huge, giant sign that says $2.79 and two canopies. That’s great for a highway where you’re trying to get attention, but in a neighborhood, everyone knows the station is there.”

His point: Being sensitive to the local jurisdiction may open doors for retailers. Many of these difficult neighborhoods are affluent and in need of c-stores, but they want   to maintain the charm and character of their unique communities, Gross says.

“They don’t want ‘generic,’ ” he says. Retailers who win in these areas will build stores that attract affluent, loyal customers whose dollars may offset higher upfront costs, he says. “They spend the time and money on making design elements speaking to the vernacular of the neighborhood.”

Success for c-stores going forward means “decoupling” the food offer from the fuel, possibly placing pumps behind the lot to make the store the “hero” of the site, Bona says.

“If you’re building a store with great food, don’t be brainwashed into putting  the pumps out front,” Bona  says. “Take a fresh approach  to site planning.”