It was only a matter of time before it happened. 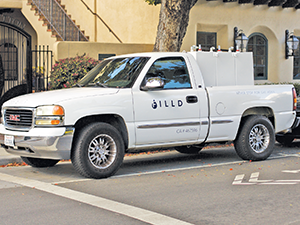 In the past year, at least three on-demand-fueling startups have emerged, promising consumers the convenience of a gasoline fill-up where and when they want it. Each one, enabled by a smartphone app, aims to make the weekly trip to the local gas station a choice rather than a necessity.

“The fact that we’re in an environment where more people have mobile phones, access to the Internet, mobile apps, definitely enables these kinds of services to work and be more popular than they were 10 years ago,” says Scott Hempy, president of Filld LLC, Palo Alto, Calif., which offers on-demand fueling services in Silicon Valley.

Hempy was inspired to create Filld after pondering the technological marvel of Air Force One, which can refuel while in flight. If it can work for a plane in motion, why not for a car in park?

Here’s how these services typically work: Download an app and create an account with your billing and vehicle information. Next, select a delivery window for a fill-up and drop a pin on the app’s map to indicate your vehicle’s location. The service sends an alert when its driver is on the way. The driver arrives, fills up the tank and then e-mails you a receipt.

The price for this convenience? A small delivery fee, typically around $5. All of the services claim to price gas at or even below the market average, using their own methods to deliver on this promise, whether buying fuel from a distributor or the least expensive gas station around.

Users can order a 10- or 15-gallon fill-up via the Purple app for delivery within one to three hours; to build up the service’s client base, the delivery fee right now is only $1. Purple, which launched in May 2015, was so timely it attracted the financial backing of Uber co-founder Oscar Salazar.

Uzzan points out that Purple was inspired by the map function in Uber’s app but is not otherwise connected to Uber Technologies beyond Salazar’s support.

'Biggest Gas Station in the World'

Despite small differences between the services, they all have a common hook: working around the shortcomings of the current fueling experience.

“Cars don’t move for 96% of their life—they’re idle. We’re forced to fill them up for the 4% of the time that we’re using them,” says Wisam Nahhas, vice president of business development for FuelMe LLC. Meanwhile, FuelMe’s own consumer surveys show that 98% of people “hated” going to the gas station. “Between that, we thought we had a good business to start with,” he says.

FuelMe started in California in 2012, but it has since moved its headquarters and services to Nahhas’ hometown, Houston. Unlike Filld and Purple, which serve individual consumers, FuelMe has embraced the corporate client, targeting businesses, universities and other large entities for whom it can fill multiple vehicles in the same area. It has about 10 Houston-area clients representing “several hundred” fill-ups a week. The largest is the University of Houston, which offers FuelMe services to its faculty, employees and students.

While the corporate-client approach gives FuelMe a more efficient, profitable model with which to get started, the company eventually would like to offer fueling services to individual consumers who live nearby, and expand to other large cities in Texas.

Purple has similar aspirations. “We have a big vision that we could be one of the biggest gas stations in the world,” says Uzzan.

“Gas distribution hasn’t changed for about 60 to 70 years,” he continues. “You’re in your car, and you don’t have to think about it, but you have to drive to the gas station on average once a week. Your hands are getting dirty, it smells bad, you’re not doing anything while you’re filling your car,” he says. “Convenience is a very important factor in what we do.”

Uzzan, a Purple customer himself, has not been to a gas station in four months, “which is changing the way I’m using my time,” he says. “Time is critical for everybody. People are willing to pay $1 to $2 for not going to the gas station anymore.”

With the relatively low gas prices of 2015 as a backdrop, on-demand fueling seems an inexpensive luxury. Filld’s founders initially had one key user group in mind: the working professional who understands the value of time, drives a nice car and makes enough money in the Bay area to pay for a small luxury.

But pilot testing also identified two other promising customer groups: young moms and the elderly. A sizable percentage of vehicles that Filld fills are minivans, Hempy says. And for seniors, the gas station is “not a place they enjoy being, and [they] would like to be there less,” he says. “They like the convenience of making sure the car is filled up, for wherever they’re headed.”

“It’s not the amount of time you spend—it’s when you have to spend it, which is a real problem for some people,” says Chris Aubuchon, CEO of Filld. “The c-store is a time saver for those who want to use it for the convenience of getting a gallon of milk or whatever. We’re saving them time on the fuel portion.”

So what’s a little time worth? In terms of the delivery charge, $5 seems to be where most of the on-demand services are settling.

“With $10 you might lose people, but $5 is a sweet spot where most people will make a decision to use our service,” says Nahhas of FuelMe. “They value their time and don’t want to worry about filling up at a gas station in downtown Houston, or leaving work early to fill up, or getting stuck in traffic, or leaving home early to fill up.”

For now, all three on-demand fueling providers say they’re making sales fairly easily. While none would share an exact number of active users, they are encouraged by the reaction to the service.

Since its launch in May, Purple had amassed a “couple thousand” users, even though it does not yet have a formal marketing campaign, says Uzzan. It instead is relying on word-of-mouth, Facebook and promotions such as $10 off the first fill-up, as well as that limited-time-only $1 delivery charge, to gain critical mass. According to Uzzan, Purple signs up as many as 30 to 50 new users per day.

Filld, also launched early this year, has “hundreds” of active users, with a waiting list “well above the four digits,” Aubuchon says. It is taking a slow, measured pace with growth, approving new users as its service can handle them.

If this is the case, are on-demand fueling services in danger of becoming a disruptive force for traditional fuel retailers, just as Uber is to the troubled taxi industry?

“The question regarding their success will be how much of the premium is acceptable,” says Norman Turiano, principal of Turiano Strategic Consulting, Cape Coral, Fla., and former head of fuel business development for Wawa Inc. “The initial strategy I would think would be to go for the more affluent segment of society, and then as your costs drop with volume, lower the premium, increasing the value to a greater number of consumers.”

Wawa tested home delivery of store goods back in the 1990s, Turiano says.

“That they have not delved back into it yet is telling,” he says. The cost of equipment maintenance, meanwhile, makes home fuel delivery less compelling for brick-and-mortar retailers.

“As a startup, you can focus on one core business,” says Turiano. “For a c-store chain such as Wawa, it’s a distraction. And they could do it on a scale to make money, just not enough. For smaller operators, it’s unfeasible to break even.”

In the meantime, on-demand-fueling providers are casting their nets wide, with talk of launching in new regions, offering new fuels and maybe, eventually, achieving worldwide domination.

“We’re trying to become one of the world’s largest gas stations,” says Nahhas of FuelMe. “Once we open up to residential, it will become a reality.” 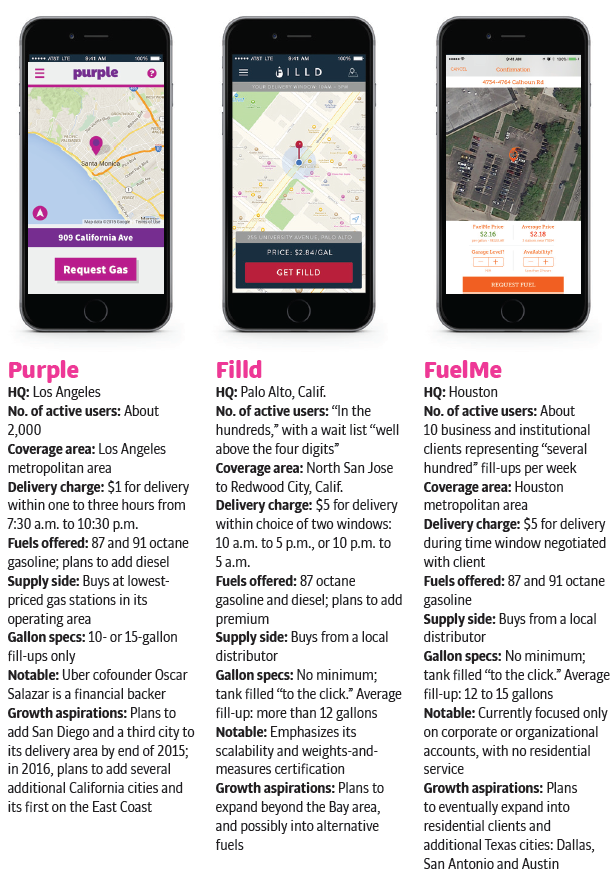 Another Name in On-Demand Fuel Delivery