There’s at least one place where the debate over c-stores’ role in the better-for-you movement has been settled. 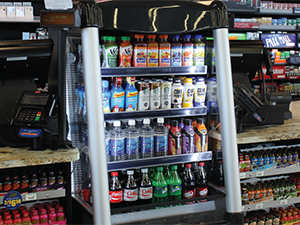 Jared Scheeler, managing director of The Hub Convenience Stores in Dickinson, N.D., can relate. The BFY packaged-beverage segment has been a solid performer across all demographics at his location since it opened in early 2015.

“Brands that are getting the best traction include Muscle Milk, Core Power and Starbucks Doubleshot Coffee & Protein,” he says. “And cold-pressed juices, enhanced waters and fusion beverages have gained momentum among blue-collar workers, the working mom and business professionals.”

At Country Fair, which has 72 locations throughout New York, Pennsylvania and Ohio, Naked Juice, Alo aloe waters, Bai antioxidant drinks, BodyArmor and Fiji Water products spearheaded an 18% sales boost in healthier packaged beverages for the chain from June 2015 to June 2016.

“We’ve actually experienced 25% category growth over the same period in 10 of our stores, where we’ve recently installed grab-and-go cold cases,” says Jaime Pukylo, sales manager for Erie, Pa.-based Country Fair Inc. “In these cases, as well as our cold vault, we put higher-end, better-for-you drinks on the top shelf, and the sales have been great.”

“This is an overall shift, driven primarily by millennial consumers, who really ushered in the demand for products that are better for you, the planet and the community,” she says. “Gen Z is now coming into adulthood and has many of the same values, so the demand will continue and likely grow.”

The flow of new products and segments is spurring increased fragmentation, much akin to how cable TV splintered the world of network TV.

“Innovation in the health-and-wellness space is very active across categories,” says Elizabeth Sisel, beverage analyst for Mintel, Chicago. “However, consumers are taking a particular interest in waters, teas, coffees and some juices, but also in cross-category beverages that fall into a gray area between categories, like Bai’s line of products.”

“People are choosing bottled water as a health-and-wellness option for hydration, unsweetened teas for their antioxidants, and cold-pressed and natural juices as grab-and-go liquid meal replacements,” says Modi.

Also propelling the BFY beverage trend, says Crecca, is a blend of health and global consciousness.

“Negativity is out and positivity is in when it comes to health products. Rather than saying ‘nonfat,’ terms such as ‘fat-free’ resonate, as do ‘additive-free’ and ‘preservative-free,’ ” and these descriptors also invite for a higher ring, she says. “Sustainability and socially conscious attributes also attract consumers, such as ‘free-trade coffee’ or ‘organic tea.’ ”

Any fear that higher prices would chill BFY-beverage sales can be tossed out of the cooler.

Modi says BFY cold beverages typically range in price from about $1.20 to as high as $6 for a premium juice or smoothie drink, and in size from 12 to 20 ounces. “There is a good, better and best option in this set, and convenience stores are carrying all three,” he says.

Ask Hemphill and he’ll suggest that retailers should always group products by category to help consumers find the desired products faster. “That said, in some markets it might make sense to carve out a special section or designate a separate cooler for healthier beverage choices,” he says.

Case in point: The Hub stores feature refrigerated cases built into the checkout counters that sport a wide selection of BFY beverages.

“Our sales data would generally dictate that other better-selling products should be in those cases instead of the healthier beverages,” Scheeler says, “but we’re still in the process of building our identity in the marketplace, and we’d like to be identified as a forward-thinking, progressive retailer.”

If Modi were operating his own c-store, he’d segment BFY cold beverages by purpose—with meal-replacement drinks such as protein shakes in one section, energy drinks that address fatigue in another, indulgences such as soda that complement food grouped together, and hydration/active products such as Gatorade and bottled waters in yet another area of the cold vault.

As opposed to past practices of positioning beverages by flavor and calorie counts, “more convenience stores are trying to group these beverages together by need state and function,” Modi says.

With BFY beverages commanding as much as 30% of the real estate within the cold vault, beverage category managers are faced with the dilemma of what to kick out.

“Many of the tertiary brands that are not turning well would have to go, which will vary from area to area and store to store,” Modi says. “That’s what makes a c-store manager’s job so difficult: How do you make sure you have the proper assortment?”

“Where space allows, I recommend really committing to this segment rather than just having a few SKUs just because everyone else does,” says Scheeler of The Hub. “We have as many facings of Muscle Milk and Core Power as we do enhanced water.”

Pukylo of Country Fair agrees. “The more variety you can offer, the better. Also, make sure your orders are tight and written properly. You need to establish good partnerships with your vendors and store personnel to ensure that you’re not overstocked,” he says.

And be sure to scrutinize sales data to truly understand the cash cows.

“A product that retails for $3.69 is going to tally profits more quickly than a product at $1.89, unless of course the unit movement is that much more,” Scheeler says.

Pairing BFY beverages with other consumables for a bundled bargain can also spark sales—if promoted properly. Modi recommends retailers with mobile apps use them to push messages to walk-in patrons on special deals such as “Buy two Gatorades and get a free PowerBar.”

“Or you can go old school [with] a physical display and signage next to the cold vault for a bundled deal,” he says.

To goose sales in other areas beyond the cold vault, Scheeler stocks a wide assortment of BFY beverages in his refrigerated deli case near packaged sandwiches, wraps and fresh-cut fruit.

“If you are able to offer a good selection of healthier drinks like coconut water, enhanced water, cold-pressed juice and unsweetened iced tea and you offer special promotions, you’re going to create an aura of health and wellness within your store,” says Modi. “But this aura cannot be created singularly with just the beverage aisle; it has to be married with your food offerings as well.” 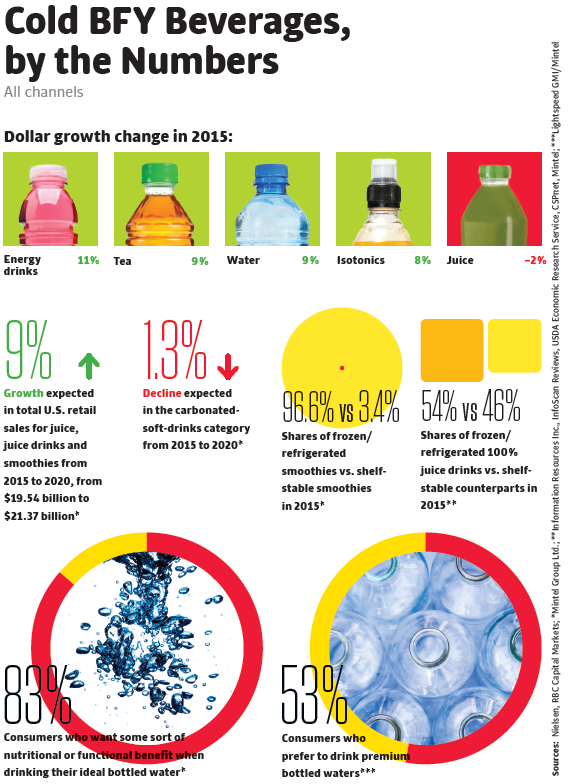