Steam is synonymous with healthful. Think steamed broccoli, fish and rice—staples of any weight-conscious eater’s diet. But steam can also mean versatility, especially when it comes to preparing the wide variety of nonfried items that offer freshness, health and flavor to today’s differentiating consumer. 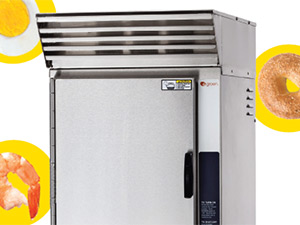 Lately, there’s been an increase in rollouts of steamer equipment, with manufacturers introducing combi-oven models with expanded steamer functionality that strengthens food integrity and new stand-alone steamers designed to fit into the smallest c-store kitchens.

“Steamers are versatile appliances that can be used to prepare everything from meat items to side dishes and even desserts, all within a small footprint,” says Charlie Souhrada, vice president of regulatory and technical affairs for the North American Association of Food Equipment Manufacturers (NAFEM), Chicago.

At the 2017 NACS Show, a few noteworthy introductions were on display, including the Groen Vortex100 connectionless steamer from Unified Brands. The steamer, which features a water reservoir for stand-alone steaming, offers a way to heat products merchandised on roller grills more quickly.

“If a roller grill runs out of product at peak times, it can take up to 15 minutes for additional product to reach the proper temperature and be available for sale,” says Clay Thames, product line director, cooking and warewash, for Unified Brands, Conyers, Ga. Steaming can help bring hot dogs, sausages and other items up to temperature before they even reach the roller grill, which could help retailers recoup “thousands of dollars in lost annual revenue that can result from just five lost sales a day,” Thames says.

Michael Williams, Unified Brands’ director of culinary marketing, retail, for the grocery and c-store segment, says steam works six times faster than a conventional oven in bringing products up to temperature. And it can heat a range of foods in addition to those on the roller grill.

“A stand-alone steamer allows you to prepare multiple items at once, with less square footage,” Williams says. “Whether you’re heating meats, soups or products for the hot line, you can heat up to between three and five products at the same time, and the product can also be held in the device.”

But how can retailers deliver on great taste and food quality if a single steamer is cooking different items at once?

“Steam can’t scorch or burn food—the temperature never rises above about 212 degrees—and you don’t lose product weight in the process,” says Williams. “And flavor transfer is not a problem with steamers. Your rice won’t taste like fish, for example, unless water from one item you’re cooking drips down into another.”

For c-stores looking to step up their food and beverage game, steamers are an efficient and flexible tool. High-power, energy-efficient and, in particular, hood-free models are ideally suited to this channel.   "Most connectionless steamers don’t require a hood system, which can save thousands of dollars in installation costs and allow flexibility,” says Souhrada.

Big steamers that can pull double- or triple-duty are impressive solutions, but what about more compact equipment that allows retailers to focus on one food item at a time—especially for daypart expansion?

A&W, the 620-unit quick-service brand with about 90 locations in gas stations and convenience stores in the United States, is rolling out an all-day breakfast program at 550 units in Canada using Antunes’ Egg Stations.

The small-footprint Egg Stations use steam and heat to cook eggs to order. After a successful test in a few locations, the chain decided to roll the equipment out chainwide.

“The Egg Station gives us menu consistency, meaning eggs will be cooked the same way, in the same amount of time from store to store, and that’s the type of reliable guest experience that we strive for,” says Jean O’Connor, manager of equipment services for A&W Canada, North Vancouver, B.C.

“We saw an opportunity to expand the use of this piece of equipment to increase efficiencies across the chain,” says Tyler Pronyk, director of distribution, equipment and packaging for A&W Canada.

The latest steaming tool from Antunes is the Jet Steamer, which uses a steam wand that injects dry steam into foods to improve their taste, appearance and preparation time. It has a detachable cup that holds the food item, which is then cooked with the steam wand, often within a few seconds. For example, one egg can be fully cooked in just 10 seconds. The scrambled egg also appears to double in volume after cooking, heightening the visual appeal for egg sandwiches, wraps, bowls and burritos. The Jet Steamer also has a customizable touchscreen.

Combi ovens also use steam, but they can be challenging to operate. The ABC7-P combi model, a new  boilerless, electric combi-oven steamer from Baltimore-based Vulcan Equipment, has a temperature probe to take the guesswork out of cooking with steam and other methods at the same time.

“Combi ovens are often too difficult to use. When this happens, kitchen staff tend to either avoid it, or use it without taking advantage of the combination cooking,” says Ray Bittikofer, business unit manager of combi ovens for Vulcan. Operating the ABC7-P requires no special training. Staff can “just dial in the temperature and time like a convection oven and let the preprogrammed humidity do the rest,” Bittikofer says.

For c-stores working to capitalize on the growing foodservice opportunity, steaming equipment offers the ability to cook food faster, add a healthful glow and diversify menus across dayparts—all while improving the customer’s quality perception. It’s a combination that takes steaming way beyond broccoli. 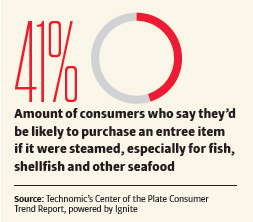 What’s on the Menu?

Steamers cook up more than just rice and vegetables. Retailers should ask their equipment providers for culinary inspiration. “Many manufacturers have chefs on staff to help guide users on how to create and prepare menu items with a steamer,” says Charlie Souhrada of NAFEM. Some options include: