So maybe you are wondering just what the heck that headline relates to. I guess I should provide a little background about my thought process. 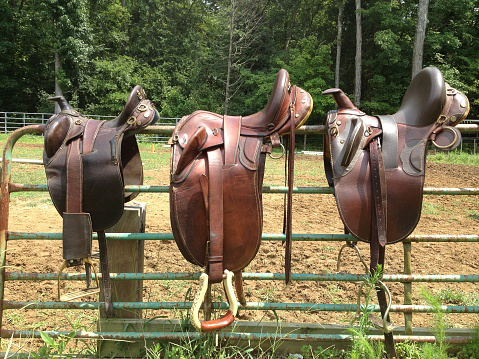 Though it might seem strange, my “horseman days” took place back when I lived in Missouri and not during my 28 years in Texas. (I know, things happen in mysterious ways.) However, the life change became etched into my consciousness several years ago when I was sitting on our patio and my lovely bride said to me, “Look out on that golf course: That is as close as you will get me to the country, living with horses.”

It’s difficult to throw a saddle over a golf cart and ride it; it’s not sane, either. That’s why it seems strange to our neighbors and friends that we have saddles hanging in our garage along with tack, saddlebags and other horse-related stuff. Just gotta have some memories of the days of insanity when life was full of “nothing will happen” moments followed by several visits to the local hospital to repair “those things that did happen.”

Yep, I think I can peg what incidents from earlier in my life led to the need for lower-back surgery a couple of months ago. When you’re on your back after being thrown from a horse at age 30, you never think, at 70, that moment just might come back and grab you in the rear. It’s always fun, but it’s usually pretty stupid. It’s also applicable to realize that if you fall off the horse, the first thing you do is get back on and ride. That applies to life and business in many ways each day of our lives.

As Winston Churchill  said, “Success is stumbling from failure to failure with no loss of enthusiasm.” It’s the ability to continue the quest when it seems there will be no way or direction to achieve it, given the challenges at hand. This applies in so many ways to the projects with which our company becomes involved while advising and assisting our clients. The clarity of reality is best explained with what seems like the simple desire to create a new retail facility within a trade area that has characteristics and an environment to support such development.

However, local governments, regulations, ordinances, restrictions—you name it—get in the way. Hence, only through sheer determination and unrelenting spirit (as well as deep pockets, in many cases) do many of the best c-stores exist today. That’s because the first, second and third “waves of no” are not accepted as the driving forces that will determine the site’s future. A great deal of this country (though certainly not all) exists under such trying and negative environments.

We as a company are in the middle of one of those fun projects that happen because of community acknowledgment and recognition of what it needs to better serve its citizens. This is a Midwest (gotta love it) community of more than 12,000 that has experienced (and is experiencing) good, consistent population and economic growth. This is linked to the ongoing industrial, commercial and healthcare development that then requires the need for additional housing and support services.

Our designated manager for this project set up the first in-town meeting with our client, who stated there would be additional participants at this meeting. That initial get-together lasted more than four hours and included the mayor, city manager, county economic development director, public safety director and 21 various CEOs, presidents and owners of the largest businesses within the expanded marketplace.

Each wanted to relate how much the community was ready to encourage and support the development of this proposed facility, which consists of a travel center, fuel forecourt, designated truck fueling, two free-standing branded foodservice offerings and a hotel. The total project will be completed within only a year simply because it is being nurtured and embraced by the community it will serve.

On the other side of this coin is a reality that so many c-store retailers experience. We are also involved with a project that is in the middle of its third revision—over a period of more than seven years—due to the obstacles placed before the developing company by every possible governing agency and anti-business politician, along with negative “city fathers.”

So those are two perfect examples of what the members of this industry experience. The first is the rider who is presented the horse by the breeder and told to ride it to its full ability. The second is the rider who keeps getting the horse pulled from underneath him, but continues to get back up and defy all odds. Knowing this industry, it’s best to get used to both.

Jim Fisher is CEO of IMST Corp., Houston. Reach him at jfisher@imstcorp.com.