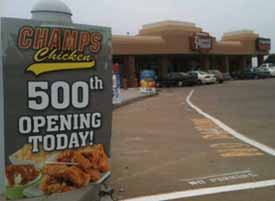 "Our next goal is to reach 5,000 stores and be a leader in the branded foodservice industry," said Shawn Burcham, CEO and president of Champs Chicken.

"We're thrilled to be offering Champs Chicken at Choctaw Travel Plaza," said Sharla Bilyeu, manager of Choctaw Travel Plaza. "The food's excellent, and I think customers will notice a menu lineup that's far beyond what we'll find elsewhere in Poteau."

Festivities included door prizes and meal deals throughout the day, as well as an appearance by Champ.

The opening celebration also featured a charitable component. "On June 7, Champs Chicken will be donating 10% of all sales toward tornado relief efforts in Oklahoma," Mia Platz, marketing manager of Champs Chicken, said. "While we're new to Poteau, we want people to know we support our Okies."

Champs Chicken is currently operating in three Choctaw Travel Plazas throughout Oklahoma, with plans to open three more in the coming weeks.