OAK BROOK, Ill. -- In an increasingly competitive industry, finding bright spots is crucial for gaining an edge. As part of Fare's annual State of the Industries, we share what's up, what's down and what's next for foodservice at retail. Following are insights on the state of college and university retail foodservice. (Click here for Part 1 on the foodservice-at-retail shopper, here for Part 2 on c-store foodservice and here for Part 3 on grocery/drug/mass foodservice.) 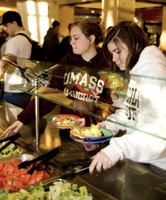 Despite a small dip in traffic in 2011, according to The NPD Group, college and university foodservice has become the bellwether for foodservice trends.

Students are entering college with a level of food sophistication never before seen, while campus administrations are using foodservice as a recruitment tool. All this has driven foodservice directors to get ahead of the curve in terms of great menu, marketing and concept ideas.

Further catering to consumer needs, campuses--and all other non-commercial segments--are increasingly portable. According to FoodService Director’s 2011 Portability Study, 79% of non-commercial operators offer grab-and-go menu items, up from 73% the year prior.

Operators who offer grab and go report an average of 22% of all foodservice revenue comes from these items. College operators said that one quarter of their revenue comes from portable foods, followed by hospitals (23%), long-term care/senior living (22%) and business and industry (18%).

Through 2012, 51% of respondents say they expect grab-and-go revenue to increase and 44% say it will remain the same. For those operators expecting sales to grow, the average predicted rate of growth is 12%.

Most respondents stated at least two reasons for the expected growth: Customers have less time to spend in the dining area (67%) and more customers are asking for grab-and-go foods (58%).

Overall college and university foodservice traffic (not just grab-and-go) decreased 1% in the year ending December 2011, reports The NPD Group, though the morning meal and p.m. snack day-parts both saw a 2% leap. Supper took the biggest blow with a 4% decrease in traffic.

Despite that dip in traffic, the college and university segment is expected to see a 3.8% growth in sales in 2012--or 0.6% in real growth--for both self-op and contract management, according to the National Restaurant Association (NRA). “Both K-12 and C&U are growing at above-average rates, so consequently the foodservice demands of those segments are increasing,” Hudson Riehle of the NRA tells Fare.

“The trend within educational and health-care foodservice in 2012 is the continuation of the trend toward managed-services providers taking over many of the self-operated establishments,” Riehle says, citing the “efficiency and effectiveness” managed-service companies can provide.

When asked which menu category had the highest sales growth potential at retail sites in the next year, college and university operators said sandwiches had the greatest potential (44% of respondents in the Fare State of Foodservice at Retail study), followed by entrees/home meal replacements (26%), salads/salad bars (23%), pizza, specialty coffee and chicken (19% each).

Exclusive: State of Foodservice at Retail