WASHINGTON -- The Affordable Care Act's menu-labelling proponent is coming under fire from convenience store retailers and their associations. Exact requirements are still being hashed out by the U.S. Food and Drug Administration, but as the act stands, many gas-station owners will soon be required to post calorie counts and other health data for the hot dogs, nachos and other junk food sweating under heat lamps near their cash registers, according to a Wall street Journal report. 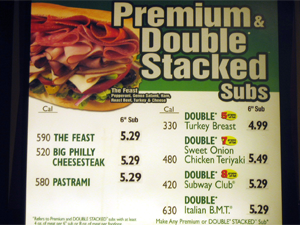 The intent is to give customers more information so they can make healthier food choices, according to the FDA. But to franchise owners who run gas station convenience stores under brand names including Exxon and Shell, the whole notion reeks of government overreach.

Convenience store owners are fretting about the new healthcare law because they often make a higher margin selling food than they take in for fuel.

The overall convenience store industry could pay between $11 million and nearly $61 million to comply with the new rules, according to the FDA’s estimates.

At issue: Who exactly pays? The Big Oil companies behind the gas-station brand names and the small business owners who buy franchises could have to negotiate who pays for what, Dan Gilligan, president of the Petroleum Marketers Association of America, told the newspaper. PMAA's members directly own about 60,000 gas stations across the United States.

Repealing the Affordable Car Act’s menu labeling requirements is a fight the organization and companies like San Antonio-based refiner Valero Energy Corp. are taking to Capitol Hill. Both listed it among priorities on their lobbying budgets for the first three quarters of 2013.

If the cost of labeling proves too onerous and gas station owners ditch hot food options in favor of peddling only pre-packaged foods, snack makers might enlarge their market share. Potential winners: PepsiCo, whose brands include Doritos and Cheetos and Mountain Dew, and ConAgra Foods, maker of the Slim Jim.