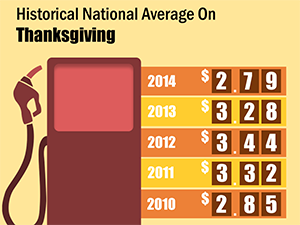 With Thanksgiving and Christmas right around the corner, falling oil prices have led many reporters and motorists alike to ask the same question: “How low can gasoline prices go?”

The answer, quite simply, is that gasoline prices can go quite a bit lower, especially given the climate that has emerged and the corresponding reaction in oil markets. When thinking about all the factors lining up to pressure prices upward or downward, it seems there’s a laundry list of factors placing downward pressure on oil, while upward pressure is next to non-existent. Perhaps the only factor putting upward pressure on oil prices is the continued decline in U.S. rig counts.

With much information to digest and countless factors that could pop up at any given moment, the overall trend at much of the nation’s pumps for this holiday season will be downward and bring the season’s lowest gasoline prices, just in time for driving to the mall for a picture with Santa (which will probably cost more than driving there.)

Motorists fueling up in South Carolina, Alabama, Texas, Mississippi and Louisiana may see an isolated $1.49 price by Christmas, while drivers in more expensive states may be able to fetch gasoline for $1.99. Without a question, hitting the road for the holidays hasn’t looked this good in a year, just like the Chicago Cubs, the team that was responsible for taking all my gas savings this autumn before bowing out in the National League Championship Series (NLCS).

What could interrupt the delivery of even lower prices? Not much, aside from the world’s largest sponge absorbing the excess oil. Demand for oil during the winter, especially in light of forecasts for mild weather, will be weak, leading to continued healthy oil inventories. Demand may strengthen in a few months when cabin fever hits, but there are not many folks that enjoy taking historic Route 66 in the middle of winter.

One concern is the price of oil--should it continue to drop, incentive for U.S. oil companies to continue pumping is reduced, which could lower U.S. oil production and eventually bring bulls back to oil markets, but that threat for the time being remains low.

Motorists will likely see favorably low gasoline prices all winter, with gasoline prices beginning a longer road to higher ground after Americans wine and dine their dates for Valentine’s Day and we begin talking about spring maintenance at the nation’s refiners and a return to summer gasoline--something that seems to be an eternity away as we start to see the season’s first snowflakes fly.

Guest Column: What Really Happened to Gasoline Prices This August