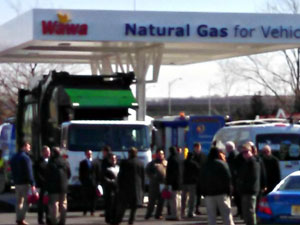 The Wawa, Pa.-based chain opened its first CNG fueling site at a Wawa site on Berkley Road and I-295 in Paulsboro, N.J., according to a report in the Courier-Post. The site opened in a partnership with South Jersey Gas, which supplies natural gas to about one-third of the state.

Wawa expects to sell 1,000 to 2,000 gasoline gallon equivalents (GGE) of CNG each week. With the pilot, the more than 700-store chain hopes to better understand demand in South New Jersey for CNG. “In the market, we’re still learning,” Brian Schaller, vice president of fuel for Wawa, told the newspaper. The CNG site will “guide us into the future,” he said.

Opening of the pilot site has been a journey for Wawa. In a presentation at the 2014 NACS Show, the chain’s former senior director of fuel, Bill Compitello, said that plans for the first site slated for CNG “went up in flames” because the local zoning board requested costly changes.

While low gasoline prices have made CNG not quite as cost-competitive as in previous years, its proponents still consider it a wise long-term investment. “As Americans we tend to become complacent,” said state assemblyman and former Paulsboro mayor John Burzichelli at the CNG fueling site’s grand opening.

“When [gasoline] was approaching $4 a gallon, everybody was screaming, ‘Where are the alternatives?’ ” Burzichelli told the paper. “Then the prices go down, and we forget about it.”

He described the Wawa CNG site as “a bold step.”

Wawa chose the pilot site in Paulsboro because of the amount of land available around it, its location near I-295 and industrial areas, and the commitment from South Jersey Gas to serve as an anchor tenant, said Schaller. The utility converted 100 vehicles in its fleet to CNG, which will generate 700 fewer tons of greenhouse-gas emissions each year compared to conventional fuels, according to South Jersey Gas president Jeff Dubois. The natural-gas supplier plans to eventually convert its entire fleet to CNG.