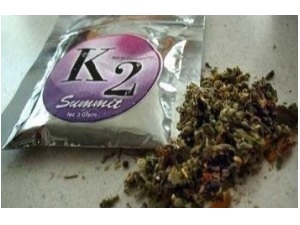 Poison centers across the country have been receiving increased levels of calls related to these substances. From Jan. 1, 2015, through April 22, 2015, poison centers have received 1,900 exposure calls from people seeking help for adverse reactions to these drugs; this is almost four times the rate of calls received in 2014.

In New York, Governor Andrew Cuomo issued a health alert stating that New York emergency departments have reported seeing more than 160 patients in a nine-day period. Alabama has seen 317 synthetic cannabinoid-related emergency department visits in an 18 day window as of April 20, 2015. Other states such as New Jersey, Mississippi, Texas, Florida and Arizona have also seen dramatic increases in reports, signaling this is a national problem.

Synthetic “marijuana” products, also known as THC homologs, are in reality very different from marijuana. Health effects from the drug can be life-threatening and can include severe agitation and anxiety; fast, racing heartbeat and higher blood pressure; nausea and vomiting; muscle spasms, seizures and tremors; intense hallucinations and psychotic episodes; and suicidal and other harmful thoughts or actions. These drugs are imported into the United States and can be sprayed on plant material or combined in other ways and marketed under such names as Spice, K2, Keisha Kole, Summit, AK-47 and many others.

The harmful effects from these products were first reported in the U.S. in 2009. Since then, the synthetic drugs have spread throughout the country due to ease of access. For example, people are able to purchase them at gas stations convenience stores. The chemical formula of these substances changes from one week to the next to avoid regulations banning specific compound formulations. As a result, the same brand purchased at different times may produce vastly different effects.

“These synthetic drugs present a potentially fatal risk that is not well recognized by people consuming these products,” said AAPCC president Jay Schauben.

"The perception that these drugs are harmless is dangerous. People and hospitals need to be aware of the potential harm they can do,” said Dr. Amy Wolkin, chief of the CDC’s Health Studies Branch.

“Our research shows that people are playing Russian roulette with their lives because only the chemist creating the synthetic cannabinoid really knows what is in it,” said Dr. Eric Wish, director of the Coordinating Center for the National Institute on Drug Abuse (NIDA). “We have found very different metabolites in different sites across the country and even in the same site over time.”

AGs Urge Oil Cos. to Pull Plug on Synthetic Drugs

Use of Synthetic Marijuana, 'Bath Salts' Declines Among U.S. Teens