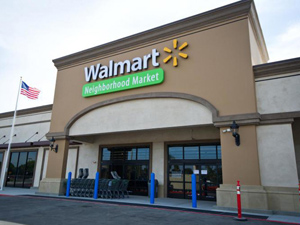 Traditional Neighborhood Markets are grocery stores that average 43,000 square feet and include a pharmacy. She reiterated that the company recently decided to rebrand its small-format Walmart Express stores as Neighborhood Markets. The process began this quarter.

But he said that the format is still being tweaked.

"Last week, I dropped into some stores in Chicago including a new Neighborhood Market in an urban area," he said. "A customer stopped me to thank us for the value we've brought to his community and it was interesting for me to see some of the similarities and differences of our fresh food offer compared to what I'd seen in Japan. We are learning across markets and can do even more of that to improve our fresh offering in all of our markets. It's a key point in our enterprise strategy going forward. In that same store, another customer strongly encouraged us to add more organic produce. She was right; we needed more. We're seeing opportunities large and small to get better."

Greg Foran, president and CEO of Walmart U.S., said, "Within store formats, we are pleased by the Neighborhood Market performance particularly in our traditional format, which reported approximately a 5.5% positive comp for the quarter."

He also provided some company-level statistics. It opened 49 supercenters, including 33 new and 16 conversions, as well as 28 traditional-format Neighborhood Markets in its third quarter. In its fourth quarter, it will shift to a "heavier mix" of small formats, opening more than 100 traditional Neighborhood Markets and 70 smaller--former Walmart Express-stores.

The Power of Retail (Mariano's Slideshow)