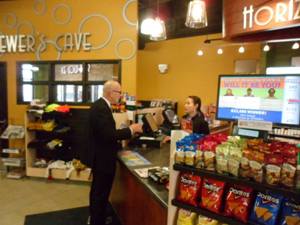 Kum & Go LC opened a new convenience store in Lowell, Ark., on December 12, replacing a previous store across the street. This is the third Kum & Go c-store in Lowell.

The Big Pine Chevron Gas Station & Food Mart in Big Pine, Calif., closed in early December for not meeting environmental requirements for its secondary containment system. "Our closing is temporary and we hope to reopen sometime after the New Year … or at least no later than spring," owner Roger Sandoval said. "The gas station failed to pass a S.B. 989 leak test required of all gas stations in the county," Inyo County director of environmental health Marvin Moskowitz said. "We worked with Mr. Sandoval to resolve the issue and allowed the business to remain open through the 2014 summer tourist season at his request in order to keep the cash flow that he needed to make the repairs. Unfortunately … the repairs did not happened."

The service plaza on Interstate 95 North in Fairfield, Conn., opened on December 12, the 19th of 23 state highway service plazas to be completely renovated. It features a Mobil gas station, Alltown Convenience Store and a Subway, Dunkin' Donuts and McDonald's. The improvements include free WiFi and backup generators, along with photovoltaic solar panels that reduce dependence on traditional power sources; single-stream recycling; idle-reduction technology for tractor-trailers; water-efficient rest rooms; and energy-efficient insulation, lighting, heating and air conditioning.

Pinky's, a Papaikou, Hawaii, convenience store with ties to the community for more than nine decades, closed on December 6. Owner Colleen Aina's grandparents, Tsukomo and Ume Hironaka, founded T. Hironaka Store, a sugar plantation store, in 1921. After several owners, it became Pinky's c-store in 1989, later expanding into toys and fireworks. She reopened the store from December 26 to New Year's Eve to sell fireworks one last time. "We want to go out with a bang," Aina said.

Two closed CITGO gas stations on the east side of Kankakee, Ill., become Gas Depot locations on December 11. The station in west Watseka, Ill., also recently changed to a Gas Depot. Gas Depot is the supplier of gas at these locations, but is not the owner.

A new gas station and convenience store opened in mid-December on the south side of Urbana, Ill. A Valero station is now operating at the former site of a Swifty station. It is owned by N&G Takhar Oil Co.

What used to be C&S OneStop at Stickney's Corner in Washington, Maine, has reopened under new ownership with a new name. Jackson Corner Store, owned by Melissa Jackson and her father, Tim Jackson, opened December 6. It also offers full-service gas.

A new Speedway convenience store opened in Wayland, Mich., on December 19 after a complete rebuilding project. The new 4,600-square-foot location will be open around the clock and will have 12 consumer fueling lanes and one commercial fuel lane. The store also has expanded parking and a walk-in beer cave. It will feature Speedway's latest evolution in food--a Speedy Café--a fast-casual restaurant where customers place their orders on a self-serve kiosk. The food is freshly prepared and will feature paninis, subs, specialty dogs, customizable pizzas, hand-crafted beverages (lattes, mochas, smoothies and frappes), breakfast sandwiches and sides.

"Stewart’s Shops had a busy 2014, completing nearly a dozen major projects, which included four new locations and six replacement shops, as well as dozens of other additions and remodels," the company said on its website and social media.

In December, a pair of local businessmen sold a 2,016-square-foot Sunoco gas station and convenience store to New York-based investors. According to documents filed in the Erie County Clerk's Office, Fred Hanania and Roger Pasquarella sold the property in in Cheektowaga, N.Y., to Buffalo City Digs LLC for $650,000. The gas station remains open.

The Little Super Market in Wilmington, N.Y., began selling Mobil-branded gasoline and diesel fuel on December 20 with help from Santa's Workshop characters. It is the first gas station in town since the Wilson Farms convenience store closed in spring 2013. Little Super Market co-owners Roy and Becky Holzer have a supply contract with Hyde Fuel.

Creek Oilfield Services LLC's Horizon Market (pictured) in Bismarck, N.D., held a grand opening on December 16. The convenience store offers its own gourmet coffee program, called Sooner or Later, and Swirly's frozen yogurt, a beer cave, a drive-thru and a car wash. The store also operates a food truck in the community. Jason McDonald and Whitney Burns of Paragon Solutions were designers on this project.

Paul's Conoco, one of Oklahoma City's last full-service gas stations, stopped pumping gas on Christmas Eve after 40 years in business. Owner Paul Dean said, "This old service station is worn out--it's time." Dean is selling the building and land, which he has owned since 1992, to begin his semi-retirement.

The Spinx Co. has opened a new convenience store in Ladson, S.C., on December 23.