HOUSTON --Sunoco LP has announced that it has completed the acquisition of Susser Holdings Corp. from ETP Holdco Corp. and Heritage Holdings, Inc., wholly owned subsidiaries of Energy Transfer Partners LP (ETP). The companies value the transaction at approximately $1.93 billion. 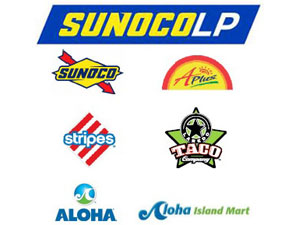 For Sunoco LP, the addition of significant size and scale will deliver new organic growth opportunities and enhance its ability to focus on a broad range of third-party acquisition opportunities. The dynamic EBITDA growth at Susser Holdings creates a strong runway for increasing distributable cash flow beginning in 2016.

It has an in-house land bank of attractive retail store locations owned or under option, which provides a pipeline for continued store development and growth.

And it currently has 61 sites in the land bank that are scheduled to be built in 2016 and beyond. It has forecasted 40 new locations in 2015.

Sunoco LP has forecasted that it will have 187 total Sunoco fuel-branded Stripes locations by yearend 2015--146 existing Stripes stores to be rebranded to Sunoco fuel, and 41 NTI stores to be opened under the Sunoco fuel brand.

Houston-based Sunoco LP is a master limited partnership (MLP) that primarily distributes motor fuel to convenience stores, independent dealers, commercial customers and distributors. It also operates more than 830 convenience stores and retail fuel sites. It conducts its business through wholly owned subsidiaries, as well as through its 31.58% interest in Sunoco LLC, in partnership with an affiliate of its parent company, ETP. While primarily engaged in natural gas, natural gas liquids, crude oil and refined products transportation, ETP also operates a retail and fuel distribution business through its interest in Sunoco LLC, as well as wholly owned subsidiary, Sunoco Inc., which operate approximately 440 convenience stores and retail fuel sites. 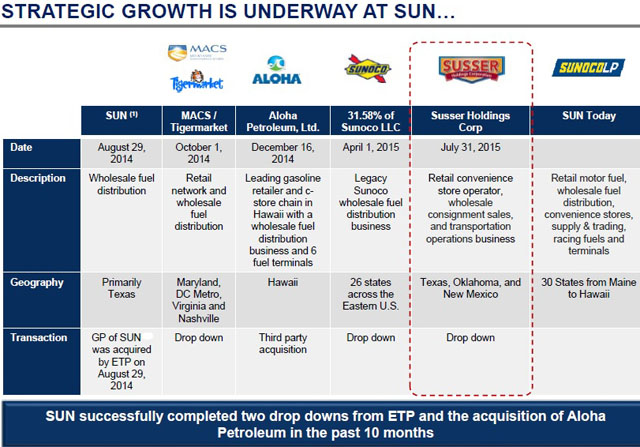 End of the Susser Era