As part of a multi-year agreement, the financial self-service kiosks will facilitate money transfer and ExpressPayment urgent bill payment for walkup customers without the aid of store personnel.

"The addition of more than 2,000 7-Eleven locations to our network makes MoneyGram services more convenient in many neighborhoods and communities and gives consumers more choices for their money transfer and bill payment services," said Dan O'Malley, senior vice president and president of the Americas for MoneyGram.

"Partnering with MoneyGram to provide money transfer and urgent bill payment services will greatly enhance the financial services on our advanced function ATMs," said Rick Updyke, president of global development for Cardtronics. "We believe that the MoneyGram services give consumers who prefer convenient financial transactions the best value."

Added O'Malley, "While the reach of 7-Eleven stores brings immediate convenience to our customers, a relationship with Cardtronics has added potential as we both have an interest in technology that simplifies financial transactions."

Separately, MoneyGram International said during its third-quarter earnings conference call last week that it will offer its money transfer, money order and other services at 6,000 CVS pharmacy stores by year-end, reported The Pioneer Press.

The previously unannounced partnership with CVS eclipses MoneyGram's arrangement with Wal-Mart in the number of stores, said the newspaper. MoneyGram is in about 3,500 Wal-Mart stores. But Wal-Mart stores are larger and draw heavy foot traffic, so they are not directly comparable, said Anthony Ryan, MoneyGram's chief operating officer.

MoneyGram had been testing the CVS partnership, in which its services are sold at photo counters, for the past several months, the report said. It began the official rollout in mid-October and currently is in about 1,400 stores. 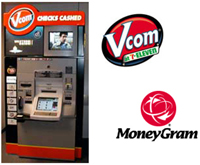