LAS VEGAS -- The long-awaited final deeming regulations were front and center during Mitch Zeller’s first-ever appearance at the NACS Show. Zeller is director of the U.S. Food and Drug Administration’s (FDA) Center for Tobacco Products (CTP). 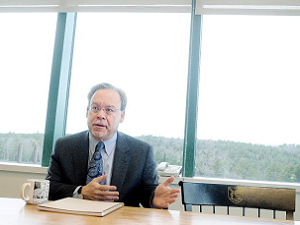 “I’d love to,” Zeller responded. “But then I wouldn’t have a job tomorrow.”

But for everything Zeller couldn’t talk about, there were three issues that garnered a lot of attention from Zeller, Beckwith, and National Association of Tobacco Outlets (NATO) executive director Thomas Briant during the “Vapor Smoke and Mirrors” educational session.

In the wake of the agency’s ‘not substantially equivalent’ (NSE) order for four Reynolds’ cigarette products, Briant asked if the FDA would consider the 30-day grace period for retailers to get the product off shelves.

“It doesn’t happen overnight,” Briant said, pointing out that some retailers might still be unaware of the NSE order and that others likely have taken the products off their shelves but are still waiting to return them—something that has previously resulted in violation letters from the FDA.

“Once the agency makes this NSE determination, those products immediately become adulterated and misbranded products,” Zeller said. “The 30-day exercise of enforcement discretion only applies to retailers—and we will enforce at retail as soon as that 30-day grace period ends.”

In other words, no, there will not be an extension to the grace period—which ends next week.

“Hopefully by the time the inspectors come, those products will be gone,” Zeller said, adding that violations will be handled on a case-by-case basis.

New York Association of Convenience Stores (NYACS) president Jim Calvin expressed immense frustration with the hypocrisy of inspecting and penalizing mainstream retailers while retailers on Indian reservations operate without any oversight, often not collecting any excise taxes and failing to check IDs.

“We’re doing the best that we can to start a tribal inspection program, but it’s slow,” Zeller admitted. “We have our first contracts in place for reservation tobacco compliance. It’s taken a lot of time.”

Beckwith brought up that the contracts the FDA has negotiated will allow tribal officials to handle inspections, likening it to having Joe Sheetz in charge of inspecting Sheetz stores.

‘We are well aware of your concerns,” Zeller said, refusing to comment further.

3. The Problem of Social Sources

When asked what the FDA was doing to tackle this problem, Zeller said the agency was working on communicating the message of social sources through anti-tobacco commercials, though not directly tackling it yet.

He also acknowledged how well the retail industry is doing at keeping tobacco out of the hands of minors.

“I applaud industry efforts on compliance,” he said. “Coming to events like this, it’s reassuring to see how seriously you take your responsibility to comply with the law.”