ATLANTA -- The Coca-Cola Co. continued the implementation of its 21st Century Beverage Partnership Model this week by signing letters of intent with two U.S. bottlers to transition distribution in their markets from Coca-Cola Co. to the bottlers. 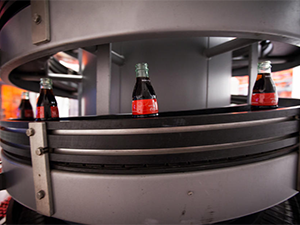 “We continue to align our U.S. operations with highly capable partners of all sizes that have consistently invested for growth,” said Sandy Douglas, president, Coca-Cola North America. “The announcement today with Coca-Cola Bottling Co. Consolidated and Clark Beverage Group reinforces our successful efforts to move forward with our refranchising plans in the U.S. as we implement a more agile, modern, customer-focused beverage partnership model.”

The new agreements follow previous distribution transitions that include an expansion of Coca-Cola Bottling Co. Consolidated franchise distribution territory in parts of Tennessee, Kentucky and Indiana

"We are continuing to integrate new franchise distribution territories in Tennessee, Kentucky and Indiana and look forward to serving even more customers, consumers and communities in the geography covered by this letter of intent," said Frank Harrison, Coca-Cola Bottling Co. chairman and CEO. "With these expansion territories, we are positioned for long-term success and strategic influence in the U.S. Coca-Cola system. ”

“We have made significant progress toward the implementation of our 21st Century Beverage Partnership Model in the U.S., which continues to strengthen our franchise system," said Sandy Douglas, president of Coca-Cola North America. "Today we mark another significant milestone in evolving our U.S. operations as we align for growth with Coca-Cola Bottling Co. Consolidated, a partner that has proven success, taken a generational view and consistently invested in capabilities and leadership. Together we continue to transform our U.S. business and move closer to achieving our 2020 Vision.”

Atlanta-based Coca-Cola Co. said it is on track to refranchise half of its company-owned U.S. bottler-delivered volume by the end of 2017.

The transactions proposed in the letters of intent are subject to the parties reaching a definitive agreement, with territory expansion closings expected to begin in the fall of 2015.