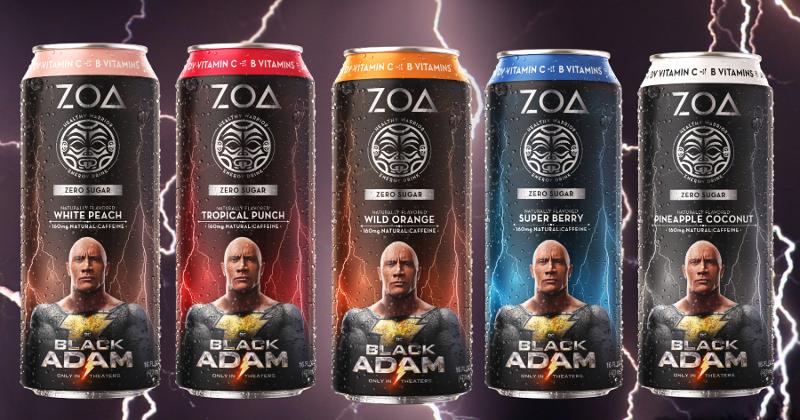 TAMPA, Fla. — The energy drink co-founded by Dwayne “The Rock” Johnson is going with a superhero makeover in collaboration with DC on the upcoming Johnson film “Black Adam.”

“Black Adam” comes to theaters Oct. 21. In the film, part of the DC Universe, Johnson plays Black Adam, an antihero who awakes in modern times after being imprisoned for 5,000 years. He wreaks havoc until he teams up with the Justice League to take on the villain Sabbac.

To celebrate the in-store launch of ZOA Energy’s “Black Adam” cans, Tampa, Fla.-based ZOA is giving fans early access to behind-the-scenes footage from the film by scanning the can’s QR code. ZOA has also partnered with Atom Tickets to give 10 winners a year’s worth of free movie tickets, a “Black Adam” film poster signed by Johnson, and a year’s supply of ZOA. From now through Nov. 15, fans will be able to enter the sweepstakes.

ZOA launched in January 2021, led by Johnson, Dany Garcia, Dave Rienzi and John Shulman, the company said, and has risen to No. 12 in energy-drink sales, according to multi-outlet and convenience-store data from Information Resources Inc. (IRI), Chicago.

ZOA’s sales have grown 134% in the last 13 weeks, and are up nearly 300% year to date, said Stallman, citing IRI data through the end of August.

“This is a brand that continues to grow in a category that’s taking off,” he said. “There’s explosive growth everywhere, and ‘Black Adam’ is only going to help ZOA move faster.”