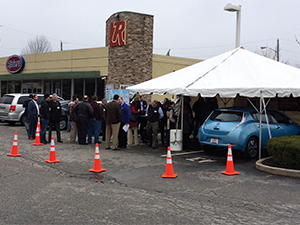 Electric vehicles (EVs) are making inroads in the minds of consumers who are eager to “go green” in their vehicle choice and leave a smaller carbon footprint. In the c-store industry, retailers are wrestling with how to become a part of this up-and-coming market, while they wait for EV charging technology to catch up with the speedy convenience shopping occasion.

According to Lisa Jerram, principal research analyst for Navigant Research, Boulder, Colo., the U.S. EV market is growing. Annual sales of plug-in hybrids and battery EVs reached more than 100,000 in 2014. By the end of 2014, the number of plug-in electric vehicles (PEVs) was close to 300,000.

“Of course, this is still a small fraction of the total car market, with light-duty-car sales in the U.S. in 2014 totaling 16 million,” Jerram says.

So where are most of the EVs? According to IHS Automotive, Englewood, Colo., the biggest state markets are California, Georgia, Washington, Florida and Texas.

However, as Devin Lindsay, principal analyst, North America Forecast, for IHS Automotive, explains, judging the state of the EV market is very subjective.

The answer, he says, may exist somewhere in between: “In a few short years, hybrids and electric vehicles have become common on U.S. roads, and at the same time, the overall penetration of the technology is very small compared to the numbers of traditional ICE—internal combustion engine—vehicles.” 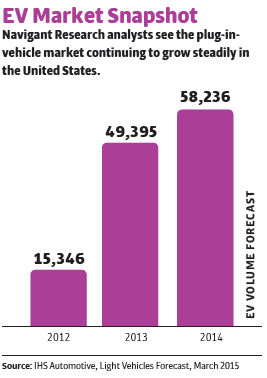 The numbers do show the EV market is growing, and Navigant Research analysts expect it to continue to grow steadily, especially as more models are being introduced and the technology continues to improve.

As automakers begin to compete for consumers’ attention within the EV market, some manufacturers have an early lead. For PEVs, the Nissan Leaf is still the industry leader, but Tesla’s sales have grown rapidly.

For plug-in hybrids, the Chevy Volt enjoyed the highest sales in 2014. However, Ford’s C-Max and Fusion Energi plug-ins together sold more in total, while Toyota is a market leader with the Prius, Jerram says.

“Watch for the introduction of more models, especially from the European automakers like BMW and Audi,” she says. “We are seeing more luxury PEVs enter the market, and we think they will be popular. The biggest change coming is a wider variety of body types, so we’ll be seeing crossover, SUV-type vehicles, and longer range.”

Lindsay says Nissan with the Leaf and Tesla with the Model S are the clear current leaders. “Both automakers have made various improvements throughout the life cycle of their respective vehicles,” he says. “One of the important benefits of producing a vehicle early in the market is that [the automakers] can gather information on how the vehicle fits within the lives of its consumer. This has been vital for the EV market, as the industry is built to meet abstract customer needs.”

By quantifying who, what, where, when, why and how, automakers can quickly (relative to ICE-only vehicles) tailor EVs to fit customers’ needs. “For example, Nissan has improved the range of the Leaf, Tesla has added all-wheel-drive to the Model S, and new interior amenities, enhanced brake re-generation and software upgrades are just a few ways marketers are modifying the vehicles to appeal to customers,” Lindsay says.

While the majority of drivers do most of their EV charging at home, the demand for charging elsewhere is predicted to rise.

Jerram says there are more than 20,000 public chargers deployed in the United States, mostly Level 2 chargers, which will recharge a car in about 4 hours.

“For the most part, public chargers are not really being put in at gas stations. The model for public charging is a little different than for gas stations right now,” Jerram says. “A charging station is more likely to be at a parking facility or a retail facility where the drivers park for an hour or more.”

However, the need for fast-charging stations, which can deliver a full charge in about 30 minutes, does open a window for the industry.

“These could be placed at gas stations, especially along highways connecting cities,” she says.

The federal government also is promoting more charging at workplaces, and it supported the initial deployment of public charging. But, Jerram stresses, states and localities are doing more now to support public charging.

“Car manufacturers are already incentivized for this market because of the federal fuel economy and greenhouse-gas emissions regulations,” she says. “The support is needed for more charging for the near term.”

Within the c-store industry, a few chains have tested EV charging. Kum & Go LC, West Des Moines, Iowa, is testing Level 2 chargers. And at some new locations, Kwik Trip Inc. has made a 110-volt plug available for EV-charging purposes. Kwik Trip, with more than 450 stores in three states—including an alternative-fuels station that offers a mix of biofuels and natural-gas fueling—does not plan to upgrade to a Level 3 system.

“Until the technology is such that fast charges are really fast, we don’t see our stores being of service to our guests with electric vehicles,” says John McHugh, corporate communications and leadership development for Kwik Trip, La Crosse, Wis. “Our guests are in our stores for only a few minutes.”

Kwik Trip is putting substantial capital into compressed natural gas (CNG), which it considers the best next-generation fueling option for its customers. “The fueling process is similar to what they currently know, the technology is available now and it is environmentally friendly,” McHugh says.

CONTINUED ON NEXT PAGE: Constantly Evolving

Other industry players see the c-store industry as constantly evolving, providing an opportunity to take new technologies such as EV charging to market. Jay Ricker, chairman and founder of Ricker Oil Co., Anderson, Ind., believes the biggest challenge is relying on consumer buy-in.

“This will always be a challenge in the world we live in today,” Ricker says. “The future of consumer fueling will continue to evolve.”

Ricker describes his company, which has more than 50 company-operated Ricker’s stores in Indiana, as “fuel agnostic.” “We want to offer what our customer wants,” he says. In the future, this could very well include EV charging. ... We are committed to being the solution for our consumers.”

Ricker Oil recently installed nine Level 3 DC fast chargers at its locations in central Indiana. It did so in partnership with Nissan, which, via its “No Charge to Charge” program, offers two years of free public charging at participating sites such as Ricker’s to buyers of new Nissan Leaf EVs. This is reportedly the largest citywide installation of EV chargers at a retail fuel chain in the United States.

The charging stations at Ricker’s first came online in March. “We don’t have a good feel for how this will progress because it will take a while to see how our customers react,” Ricker says. “Unanswered is whether the motoring public will embrace these vehicles. What will be the extension of battery in newer designs? Will these vehicles only be urban transportation?”

If EV charging proves to be an effective fueling option for Ricker’s customers, it would be considered an option in the retailer’s building process for future stores. And it could sync with the industry’s wider evolution away from the gas station model.

“With today’s momentum in the direction of foodservice coupled with adding EV chargers, additional parking will be required,” Ricker says. “This translates to slightly larger lot sizes in order to meet the needs of our valued customers.”

Sheetz Inc., Altoona, Pa., has also been an early entrant in EV charging. In 2014, the chain installed chargers at five sites in Pennsylvania to develop a charging corridor between Harrisburg and Pittsburgh. In the first six months of operation, the chargers were used about 400 times, according to Tarah Arnold, public relations manager. To accommodate these customers’ needs, the chain has incorporated seating areas in all of its store designs.

“Having our charging stations used 400 times is pretty good, considering that there isn’t much EV infrastructure in west central Pennsylvania, so there aren’t that many EVs, and it takes a while for people to adapt to new services being offered,” says Arnold.

While Sheetz is not able to quantify increased inside sales related to the EV chargers, “we’re sure they are happening,” she says. “There is definitely an immeasurable goodwill aspect, too. We’ve always cared about the communities we serve, and supporting alternative transportation options fits right in with that. We’ve had enough success with the chargers in Pennsylvania and we are exploring the option to expand.”

The biggest opportunity for the EV market and public charging infrastructure could be the introduction of longer-range batteries, which would help resolve consumers’ “range anxiety”—or fear that their EV’s battery will run out of power before they reach their destination, leaving them stranded because of a lack of charging options, says Jerram of Navigant.

Perhaps equally important is a long-range EV that the average consumer can afford.

“Currently, much of the marketing has been targeting a certain demographic, such as those with high income levels,” Lindsay of IHS says. “While this market certainly fits best for the premium cost of the vehicles, numbers would have to increase closer to the average income level of American households, along with the vehicle’s MSRP, for the volume to increase enough to take up a sizable portion of yearly vehicle sales fleet.”

Tesla already offers a long-range battery EV, but it is in the luxury segment. It is developing a mass-market EV, the Model E, which would have a 200-mile range. Chevrolet also plans to introduce a battery EV with a 200-mile range, likely priced under $40,000.

“That would open up a huge potential demand for more fast charging, since a 200-mile EV could more easily be used to drive long distances with just one or two fast charges,” Jerram says. “The c-store retailers could play a role here since they have established intercity locations and have an established business model beyond just the revenue from selling gas.”

Legislation in states such as California and, more recently, the executive action by President Obama requiring EV use by the federal government, will improve sales in those markets, as consumers find more models at the local dealership, Lindsay says: “This will also cause an increase in the building of the charging infrastructure.”

For his part, Ricker believes the future of the EV market is dependent on the advancements in battery technology.

“Consumers must be convinced that EV technology is a reliable, long-distance solution,” he says. “Because we are in the early stages of EV retail fueling, it is difficult to predict what the future holds. We believe that currently urban environments are the primary areas that are embracing this new technology.