Since 2001, the National Association of Tobacco Outlets (NATO) has worked with tobacco retailers to protect the right to sell legal products in a responsible matter. Most retailers are aware of the important role NATO has played in battling the increasingly tangled web of regulations, but you might not be aware that the creation of NATO was inspired by another well-known industry association. 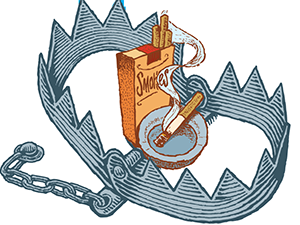 “I wanted to build this like NACS,” says Don Bores. “They had a magazine, they had a trade show and they had an association. That was what I wanted.”

NATO was the brainchild of Bores, a longtime tobacco veteran who owned the trade publication Tobacco Outlet Business. Bores also spent decades consulting for Management Science Associates (MSA), where he saw tobacco outlets as a growing trade channel with no industry association or representation.

In Tobacco Outlet Business, Bores had the magazine, and he later co-owned the Tobacco Plus Expo. All that was left to get was the association.

“Don realized that tobacco outlet stores did not have a national organization that monitored and responded to tobacco legislation,” says Thomas Briant, whom Bores recruited to serve as executive director of NATO in late 2000. “At that time, there were about 11,000 tobacco outlet stores and the segment was growing, which further necessitated a national organization to coordinate strategy on tobacco restrictions.”

With Briant on board, the two set out to recruit tobacco manufacturers to help get NATO up and running. Larry Sherman, executive vice president of Nat Sherman International, New York, received one of those early pitches.

“There was a little bit of skepticism from the group, having so many competitors working together, but also an understanding of how important it was for all of us to try and come together and try to create a singular voice,” he says. Nat Sherman has been an active member of NATO since the organization was formed.

Reynolds American Inc., Winston-Salem, N.C., was another early supporter, seeing the potential of an organization focused on the rapidly growing tobacco-shop channel.

“We saw value with an organization to represent the interests of that segment and to help fight some of the threats,” says Dave Riser, Reynolds’ vice president of external relationships—trade marketing and a 10-year veteran of the NATO board.

NATO was officially formed in March 2001; by the end of its first year, the association represented about 400 tobacco outlet stores. In 2009, it passed an amendment allowing any retailer that sells tobacco to join the association, officially opening the door to convenience operators. The move allowed NATO’s membership to grow exponentially, now representing about 51,000 stores across the United States.

In those 15 years, the regulatory environment under which tobacco retailers operate has changed drastically, from the birth of the U.S. Food and Drug Administration’s (FDA) Center for Tobacco Products (CTP) to increasingly restrictive proposals at the state and local level. Here’s a look at how NATO has helped retailers and manufacturers take on these threats in its first 15 years.

When you ask retailers about the value of NATO, one of the clearest answers is its wealth of information.

Although, like many retailers, Cumberland Farms has its own in-house legal team, it does not specialize in tobacco—prompting Flint to rely on NATO as “a clearinghouse of information on tobacco issues.”

“I have found one of the most beneficial aspects of NATO membership to be the ability to call NATO staff members and get a clear, concise answer to a question about tobacco legislation or what a FDA regulation means, and usually the answer is immediate,” says Flint, who is vice president of NATO’s board of directors.

Beyond its knowledgeable staff , NATO has also assisted retailers through its NATO News bulletins and an alert system that helps retailers and their customers send letters or testify to elected officials about specific regulations.

“NATO has simplified the process for retailers to become active in the legislative process,” Briant says. “It is this simplification that drives so many more retailers to take that first step and take action when a tobacco restriction or tax increase is proposed.”

“NATO is an excellent and important partner on public-policy issues,” says Sutton, a spokesman for the Richmond, Va.-based manufacturer. “NATO’s dedication to supporting retailers makes the organization very effective in advocating on issues related to the trade.”

NATO hasn’t just given the industry a wealth of resources; it also has helped retailers and suppliers find their voice.

“One of NATO’s great strengths is its grass-roots work with retailers to help make their voices heard in the public-policy debate,” says Sutton.

This refers to one of the key reasons Bores founded NATO back in 2001. “Tobacco retailers were being treated like second-class citizens,” he says. “The pressure on them was enormous—and they had nobody representing them.”

Though manufacturers such as Altria, Reynolds and Nat Sherman can—and do—certainly get involved on state and local issues, it’s significantly more effective when retailers and their associations provide testimony on how restrictions will affect local businesses.

“There’s been several issues where NATO’s been able to take a lead,” Sherman says. “They’ve been able to be more vocal and get heard better than any one of us could.”

That voice has been especially important given the latest regulatory trend on the local level: banning certain segments or subsegments (such as flavored products) outright, prompting customers to drive a few miles to the next city or town to meet their needs.

“The impact on retailers that are affected by these local regulations is magnified when local residents also buy their gasoline, snacks, beverages and other products from other retailers,” Briant says.

“NATO fights for retailers and helps retailers take a stand against legislation that could be devastating to their business,” says Flint, who operates in the regulations-heavy Northeast region.

One final word that repeatedly came up when manufacturers and retailers were asked to describe NATO: alignment.

“We have all these threats, restrictions, regulations that have really been some bad ones: licensing redefinitions, banning of flavors, proposals to wipe out visibility—bad stuff,” says Riser of Reynolds. “You have to have industry alignment on these threats.”

As an association that works with tobacco retailers, distributors and manufacturers—many of whom compete with each other—NATO has served to unite its members against those regulatory threats.

“Having different perspectives coming to the same table only elevates the conversation,” says Sherman. “We all have different ways of looking at a situation; we only get better by hearing from others. It gives us more clarity.

“At the end of the day, we’re all out in the streets competing for shelf space,” he continues. “But what’s good for the industry is good for all of us. NATO has been able to find common ground and get those competing retailers and competing manufacturers to all work together to defend our rights to sell legal tobacco products to adults.”

Perhaps no instance better exemplifies this unification than the infamous battle in Westminster, Mass. In November 2014, the Westminster Board of Health proposed an outright ban of tobacco sales, the first state or local government to propose such a measure.

The implications for convenience and tobacco retailers were obvious. “If this proposal would have been passed, our Cumberland Farms store in Westminster would have overnight lost all tobacco sales and forced the company to take a hard look at whether the store even remained open,” Flint says. “If you take away one of the two major revenue sources that a c-store relies on, the viability of that store is jeopardized.”

NATO was quickly on the issue, submitting comments questioning the legal case for such a ban and the potential litigation the town faced if it went forward. It worked with retailers, manufacturers, distributors and their customers to ensure a unified front.

The result: More than 500 people showed up for a public hearing on the ban, so vocally opposed that the Westminster Board of Health had to shut down the hearing after only three people testified. Board members went on to vote 2-to-1 against the ordinance.

“Through a major grass-roots campaign, fueled by many townspeople, the ban was defeated,” Briant says. “Not one single city has attempted to adopt a similar ban since.”

In other words, NATO’s educated, unified and vocal approach worked. Westminster is a prime example of just how much things have changed for tobacco retailers since NATO was formed. In 2001, Briant says, regulatory trends were largely limited to smoking bans, self-service display bans and excise taxes.

Since then, state and local governments have become exponentially more ambitious—often to the detriment of retailers.

“The real battleground over the sale of tobacco has shifted to the local level,” says Flint. “The challenges remain the same, but the number and kind of local restrictions has multiplied. … We face an anti-tobacco agenda that now seeks to literally prohibit the sale of tobacco products.”

“NATO is not only one of the best grassroots organizations in the industry, but they have also been a great asset in helping shape favorable outcomes at the local and state level,” says Steve Kottak, Reynolds’ director of external relations—trade marketing.

NATO has added to its staff to help retailers fight these restrictions—a fight that Briant and others predict will only get more difficult in 2016 and beyond. And it’s a battle in which retailers and manufacturers alike agree NATO will be instrumental.

“NATO’s a place where you can get the majority of the information so you can be more proactive rather than reactive,” Sherman says. “Sometimes regulations pop up so quickly, you don’t even have a chance to be reactive. That’s one of the things NATO’s really brought to the table: tracking all of that and getting people involved.”

Happy birthday, NATO. And good luck with the next 15.

The Man Behind NATO

It’s almost impossible to talk about NATO without talking about the man who has led the organization since its inception: executive director Thomas Briant.

Riser cites Briant’s legal expertise as a crucial part of NATO’s success, saying Briant “knows his stuff,” specifically when it comes to compiling letters on behalf of retailers and wholesalers, against onerous regulation and stating case law to elected officials.

“A lot of other trade associations have individuals more dedicated to developing the business side of the organization,” he says. “I think Tom would be the first to say he’s not a great businessman—but he is passionate about the issues.”

Briant has also cultivated positive working relationships with both state and local governments, as well as those on the federal level.

Mitch Zeller has spoken at all but one NATO Show since taking on the role of director of the U.S. Food and Drug Administration’s Center for Tobacco Products in 2013.

Though Don Bores came up with the idea of NATO, he’s the first to point to Briant for the association’s victories.

“I can’t take credit for NATO’s accomplishments; Tom has done it,” he says. “He has been miraculous at what he’s been able to accomplish.”