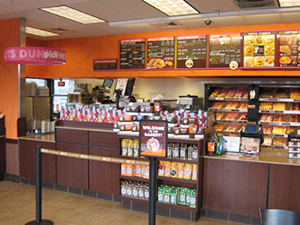 While Speedway would not comment directly on the plan to close the units, the company “reviews all marketing arrangements on a regular basis and chooses to expand or contract relationships on a site-by-site basis based on commercial reasonableness and site-specific market opportunity,” a spokesperson told CSP Daily News.

“Dunkin’ Brands today reiterated its full-year guidance for the development of 410 to 440 net new Dunkin’ Donuts restaurants in the U.S,” a Dunkin’ Donuts spokesperson said in a statement provided to CSP Daily News. “This does not include an estimated 100 franchise-owned Speedway-operated self-service units that Speedway plans to close during the remainder of 2015 and into 2016. These Speedway locations represent only 0.1% of Dunkin’ Donuts U.S. sales, and their closure presents Dunkin' Donuts with an opportunity to re-enter many trade areas with full-menu traditional restaurants. In fact, Dunkin' Donuts franchisees are opening a new restaurant every 16 hours."

Dunkin’ Donuts signed a 500-unit agreement with then-convenience retailer Hess Corp. in 2007, opening those locations through 2011. The companies signed an agreement to add 100 more Dunkin’ Donut units in 2012. Speedway acquired the Hess convenience-store network in 2014.

With more than 19,000 points of distribution in nearly 60 countries worldwide, Canton, Mass.-based Dunkin' Brands Group Inc. is one of the world's leading franchisors of quick-service restaurants (QSR) serving hot and cold coffee and baked goods, as well as hard-serve ice cream. At the end of the second quarter 2015, Dunkin' Brands' nearly 100% franchised business model included more than 11,400 Dunkin' Donuts restaurants and more than 7,600 Baskin-Robbins restaurants.